The latest monthly report from the Arkansas Realtors® Association shows a continuing uptrend in home sales around the state.   Sales of new and existing homes in July were up 9.9% compared to the previous year.  This followed a year-over-year increase of 15% in June.  Typically, the peak sales month of the year occurs in June, July or August.  Given the strength of the June report, it would not have been surprising to see a slight drop-off in July.  However, sales of 3,161 homes in July managed to exceed the 3,113 figure for June.  Cumulatively, over the first 7 months of the year, home sales are up 10.3% compared to 2014. 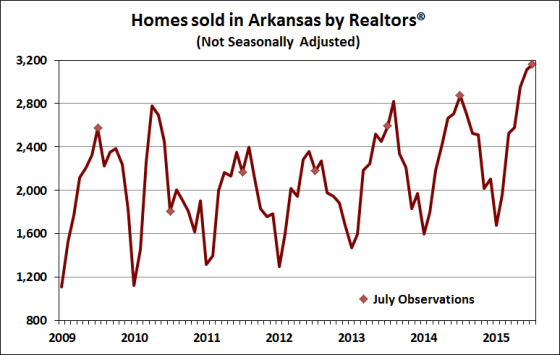 Seasonally adjusted data shown in the chart below clearly show the upward trend in home sales over the past 3 years.  The early phase of the recovery may have been driven, in part, by demand overhang from the recession and its aftermath.  Over the past 1-1/2 years, on the other hand, we’ve seen a pick up in job growth that has undoubtedly helped to spur increasing home sales.  Another factor behind this summer’s strength in real estate markets is the outlook for interest rates.  Mortgage rates remain near historic lows, but it is anticipated that the Federal Reserve will begin raising rates soon — perhaps as soon as next week.  Some of this summer’s home sales activity might be related to home buyers seeking to finalize their new home purchases before higher mortgage rates materialize. 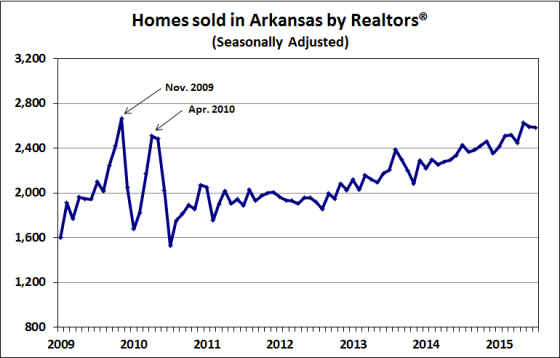 The strength in home sales has been concentrated in the larger metropolitan-area markets.  Northwest Arkansas sales increases have been particularly robust:  Washington and Benton Counties combined showed a year-over-year increase of 20.6% in July.  Among the ten highest-sales counties in the state (table below), there are a handful in which July sales were below a year ago.  However, all ten show increases in year-to-date sales.