This morning, the U.S. Bureau of Economic Analysis released advance statistics on GDP by State for 2010.   The data show widespread economic recovery, with real GDP increasing in 48 states and the District of Columbia.  Arkansas real GDP expanded by 2.3%, slightly lower than the national average rate of 2.6%.   (Revised figures for the previous year show that Arkansas real GDP contracted at a 1.5% rate in 2009, in contrast to previously-published figures that indicated a small increase for the year – see Arkansas Gross Domestic Product – 2009.) 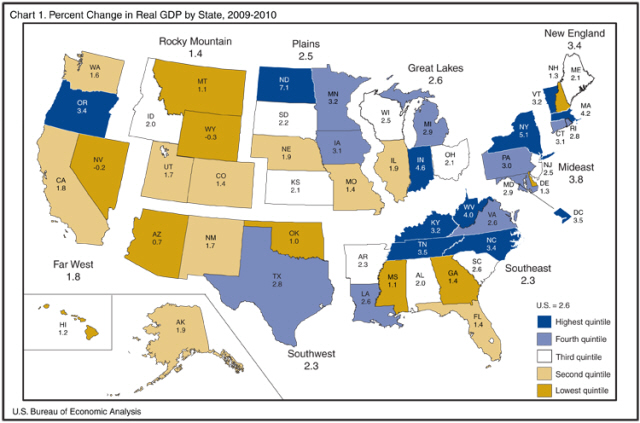 The press release from BEA noted that durable-goods manufacturing was a leading contributor to growth in 29 states.  As shown in the table below, manufacturing of both durable and nondurables goods expanded sharply in Arkansas, rising at rates of 10% and 7.7%, respectively.  Service-providing sectors expanded in all sectors except the volatile category of information services (primarily telecommunications).  Construction continued to decline, as did Agriculture, forestry, fishing and hunting.  Following two years of rapid development in the Fayetteville shale play, mining activity contracted slightly in 2010. 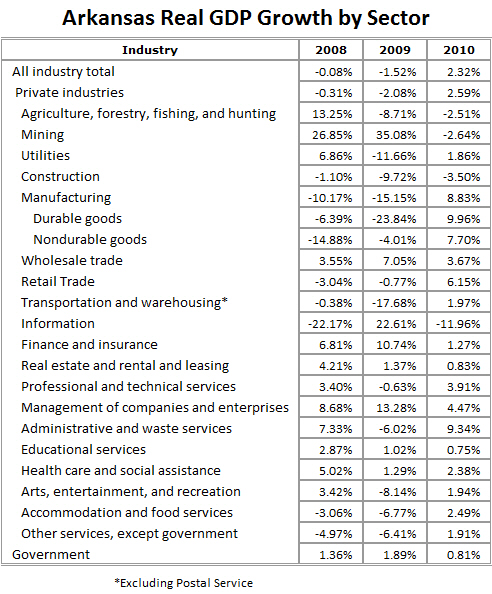 Growth rates for individual sectors can vary considerably over time, and from each other.  For relatively small sectors, these swings can convey an exaggerated sense of importance.  For example, Administrative and waste services expanded at a rate of over 9% in 2010.  However, this sector accounts for only 2.4% of total economic activity in Arkansas.  As a result, growth in Administrative and waste services contributed only a small portion to total Arkansas GDP growth–about 0.2 percentage points.  The table below shows growth contributions by sector, where the relative size of the sector is taken into account. 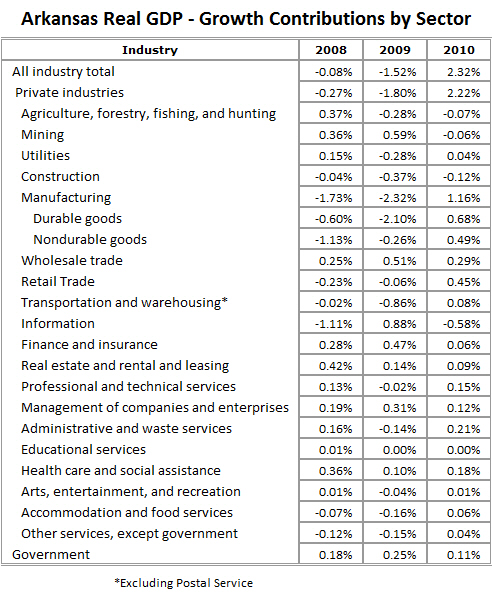 Manufacturing accounted for about one-half of total GDP growth in Arkansas during 2010.  Wholesale trade and retail trade were also large contributors.  The sharp decline in information services subtracted nearly 0.6% from total growth, with other service sectors contributing modestly to the overall expansion.