The latest house price data from the Federal Housing Finance Agency (FHFA) shows that average house prices in Arkansas continued to decline in the first quarter of 2011.  The FHFA “All Transactions Indexes,” which incorporate house price information from both home sales and refinancings, showed an average decline for Arkansas of 1.6% in the first quarter of the year.  Over the last four quarters, the average value has fallen about 1.9%.  These decreases are smaller than the national average:  In the first quarter, average prices for the U.S. as a whole fell 2.7%, and are down 3.1% over the past  four quarters. 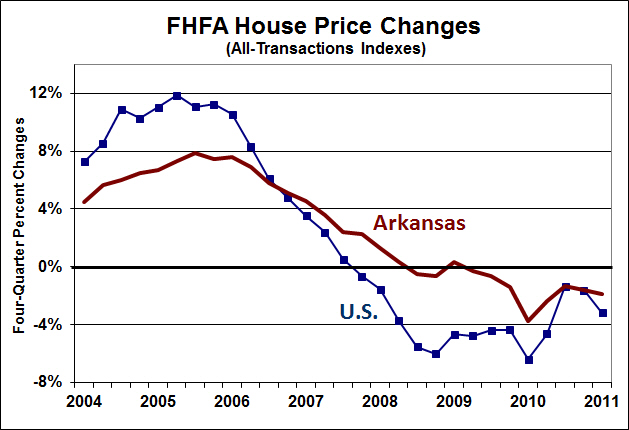 The statewide average conceals some stark differences among regions of the state.  As shown in the figure below, house prices in the Fayetteville-Springdale-Rogers metro area have followed a pattern very close to the U.S. average.  Over the past four quarters, prices in Fayetteville are down 4%, and have fallen by 14% over the past five years.  In contrast, house prices in central Arkansas are down only 1.1% compared to a year earlier, and are about 4% higher than five years ago. 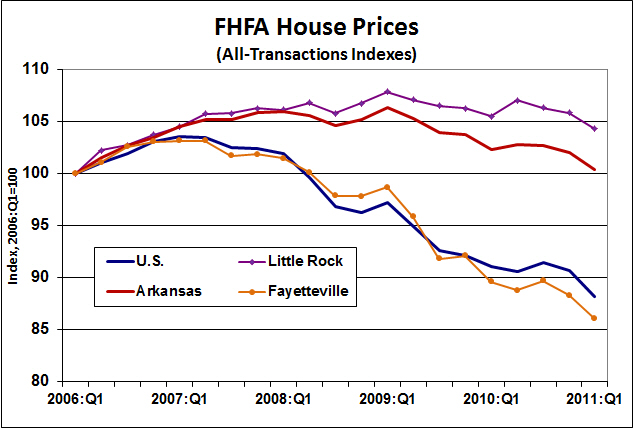 The state’s smaller metro areas have generally fared better than the statewide average as well.  In the first quarter, prices increased in Texarkana and Jonesboro. Both of these metro areas have generally seen modest but steady price increases throughout the “boom and bust” cycle experienced in most parts of the country.   House prices in Hot Springs and Pine Bluff had been rising steadily during the early stages of the housing downturn, but have turned sharply negative in recent quarters.  Prices in Fort Smith have also fallen over the past two years, but not as dramatically as in Hot Springs and Pine Bluff. 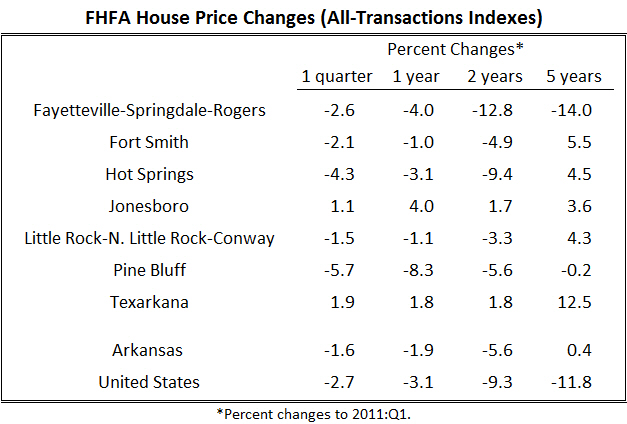 A longer-term perspective reveals the stark differences among Arkansas metro areas.  House prices in five of the state’s metro areas are higher than they were at the beginning of 2006.  Recent declines in Pine Bluff have lowered prices to about the same level as in 2006, while prices in northwest Arkansas are down by 14%–more than the national average decline of 11.8%.

It should be noted that even the relatively large price declines in the Fayetteville-Springdale-Rogers metro area pale in comparison to some of the more severly impacted regions of the country.  Over the five year period from 2006:Q1 to 2011:Q1, house prices in California are down by nearly 35%, price declines in Florida and Arizona are close to 40%, and house prices in Nevada have fallen by nearly half: -48.9%.