A parenthetical statement in yesterday’s report on real GDP growth in Arkansas mentioned that the 2009 data had been revised downward.  Advance figures reported last November showed slightly positive growth for Arkansas in 2009, but revised figures reveal that the state’s economy contracted by 1.6% — better than most other states during the year that marked the low point of the recession, but far worse than the initial statistics had indicated.

The table below shows contributions to growth for the sectoral components of Arkansas GDP growth in 2009, comparing the initial data released in November 2010 with the new data that came out yesterday.  The sharp downward revision was not attributable to any one component, but goods-producing sectors generally contributed the most to the downward revision. 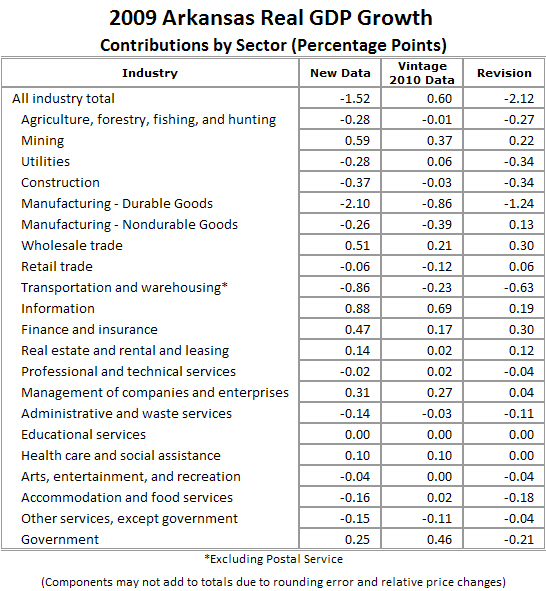 Source: Bureau of Labor Statistics (Calculations by the Institute for Economic Advancement)

The total downward revision, from +0.6% to -1.5%, amounted to -2.1%.  More than half of that total is attributed to durable goods manufacturing, which appears to have fallen far more sharply at the end of the recession than initial figures suggested.  Significant contributions to the downward revision were also registered for Agriculture, Construction, and Utilities.   Transportation and warehousing, an important component of the Arkansas economy, also contributed to the decline.  Several other service-providing sectors expanded more robustly than the previous data had indicated — particularly Wholesale trade and Finance and insurance.

When the advance report on 2009 GDP came out last November, we reported that “the numbers for Arkansas were something of a surprise.”  Employment statistics had suggested a more severe downturn in overall economic activity, and the only reasonable explanation for the positive GDP growth was that growth had been concentrated in relatively low-employment sectors of Arkansas economy.  This still appears to be true.  The downward revisions for sectors that comprise large shares of the labor force — Manufacturing, Transportation and warehousing, and Government — show that the recession hit output as hard as it did employment.  In the smaller, but growing service-providing sectors, the revised statistics for output growth in 2009 show even more strength than the earlier data suggested.  To some extent, the newly-revised figures bring some consistency to our view of the recession’s impact on Arkansas’ economy.