The latest data on state personal income shows that Arkansas continues to be one of the states recovering most robustly from the recession of 2008-09.  Annual figures from the Bureau of Economic Analysis  show that personal incomes rose 3.5% from 2009 to 2010, placing Arkansas among the top ten fastest growing states for the year.  For the nation as a whole, incomes were up 3.0% for the year. 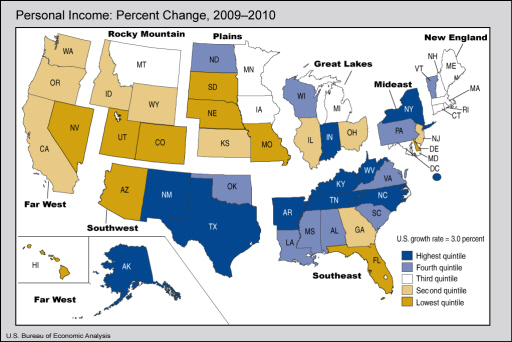 The news release from the Bureau of Economic Analysis noted that ten states–including Arkansas–rebounded to income levels higher than their pre-recession peaks.   If we look at the detailed quarterly data, Arkansas reached that point in the first quarter of 2010, and incomes in the state were 4% higher than the previous peak by the fourth quarter of the year. 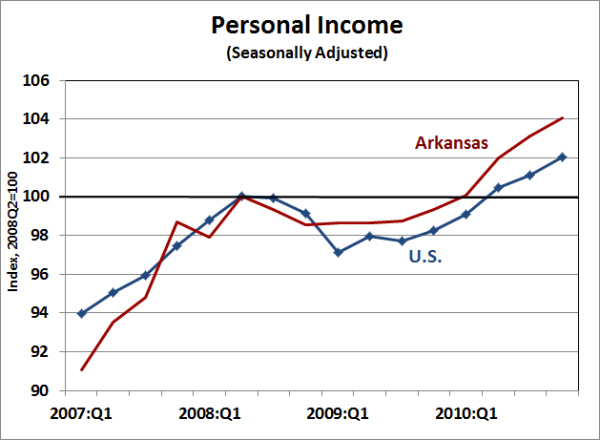 As noted in previous posts (here and here), the composition of total personal income is often distorted during recessions.  Government programs to help support incomes of the unemployed and others suffering from economic hardship tend to expand during recessions, both as automatic responses (more households eligible for assistance from existing programs) and with additional support programs (special economic stimulus programs).  Hence, it is often informative to look at income net of current personal transfer payments.

As shown in the chart below, income net of transfer payments has been slower to recover than total income.  Nevertheless, Arkansas has consistently outpaced the national average by this measure as well.  As of the fourth quarter of 2010, income-less-transfers in Arkansas reached the same level as the previous peak in 2008:Q3.  Meanwhile, the national average for this measure of income remains nearly 2% below its previous peak. 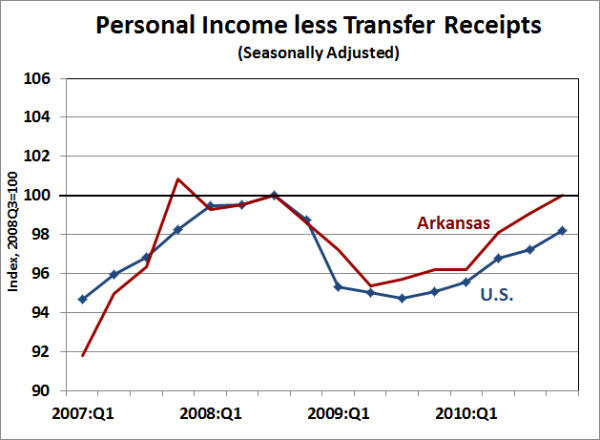 The composition of income gains was also encouraging.  In the fourth quarter and for the year as a whole, Arkansas saw increases in wages and salaries; employer-provided benefits; proprietors’ income; and dividends, income & rent.  One category of income that declined in 2010 was unemployment insurance payments.   As the economic expansion matures and unemployment rates subside, we should expect to see unemployment and other transfer income to decline as wages and salaries increase.