The latest report on metro area employment and unemployment shows that  job growth is picking up across most of the state, but Fort Smith and Pine Bluff appear to be lagging behind.   This morning’s release from the Bureau of Labor Statistics includes new and revised data that show an improved outlook for central and northwest Arkansas in particular.

From December 2010 to January 2011, payroll employment declined by 0.5% in Fort Smith and by 1.1% in Pine Bluff.  These two metro areas also showed year-over-year declines, and remain at employment levels far below those at the start of the national recession (in December 2007).  The state’s other metro areas have shown varying degrees of progress toward recovering from job losses experienced during the recession.  Jonesboro continues to lead with employment 0.4% higher than in December 2007. 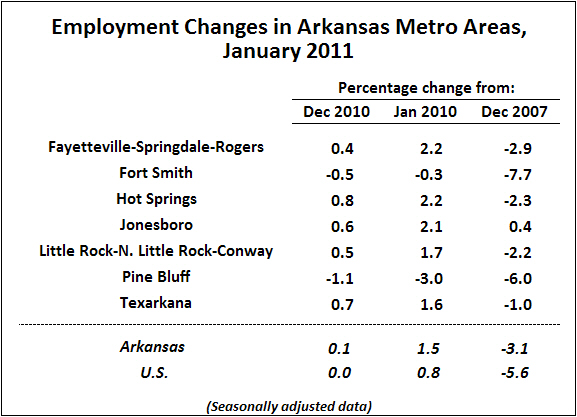 These new employment figures include the annual “benchmark revisions,” in which past data are updated to incorporate information from more detailed sources.  The revised data show that employment growth during 2010 was stronger than we realized at the time — particularly in the state’s two largest metro areas.  In previously-reported data, both the Fayetteville-Springdale-Rogers MSA and Little Rock-North Little Rock-Conway MSA showed net job losses during 2010.  The revised data show robust growth rates of over 3% in both metro areas.  The revised data shows that much of this job growth ocurred in the first half of 2010, with slower gains during the second half. 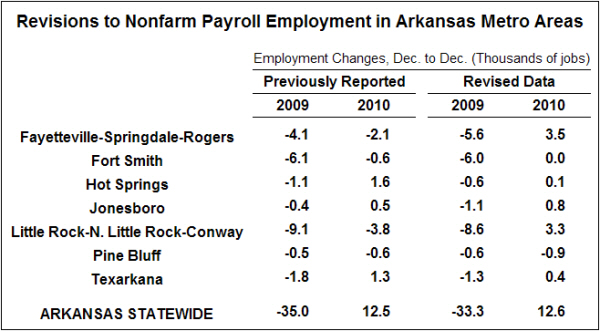 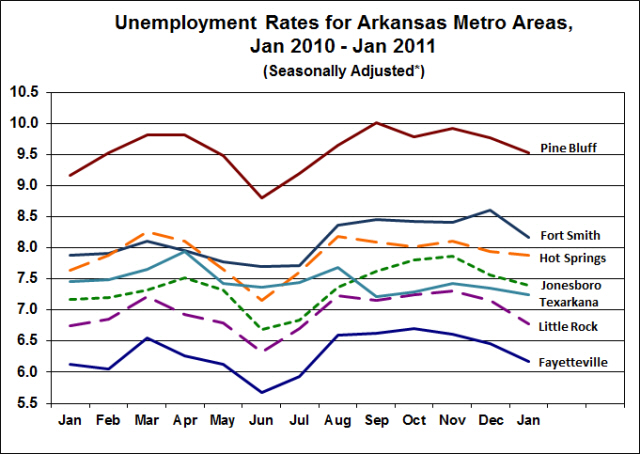