New data from the Bureau of Economic Analysis (BEA) shows that Arkansas personal income rose by only 0.2% in the fourth quarter of 2013, compared to a growth rate of 0.6% for the U.S.  Over the four quarters from 2012:Q4, growth was 0.7% in Arkansas and 1.4% for the U.S.  The year-over-year growth rates are distorted by the expiration of the payroll tax holiday at the end of 2012.  In the absence of that change in tax policy, growth would be nearly one full percentage point higher.  Since the official end-date of the recession (2009:Q2), personal income growth has averaged approximately 3.7% for both the state and the nation. 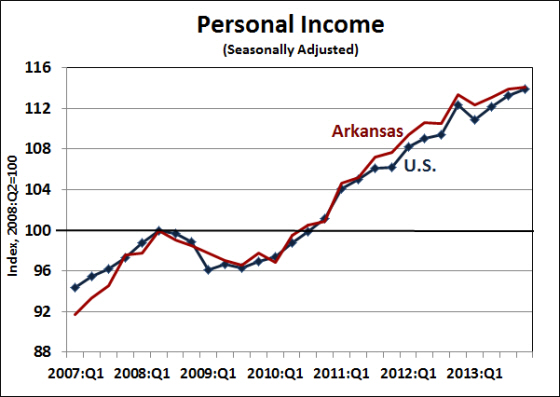 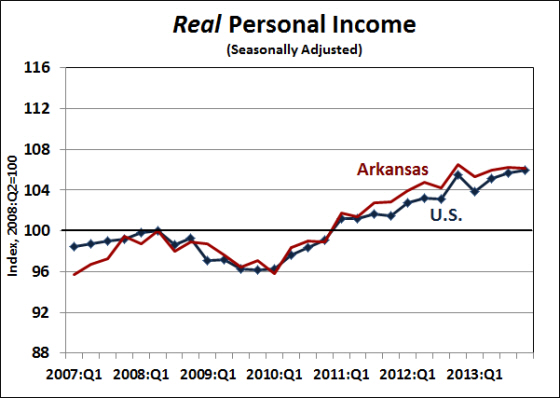 Annual Data for 2013
The news release from the BEA focused on annual averages for 2013 compared to the previous year.  On that basis, Arkansas income growth was 2.2%, compared to 2.6% for the U.S.  In terms of year-over-year growth, Arkansas ranked 35th among the 50 states.  The release noted that the national price index for personal consumption expenditures was 1.1% over the same period, implying real income growth rates of approximately 1.1% for Arkansas and 1.5% for the U.S. 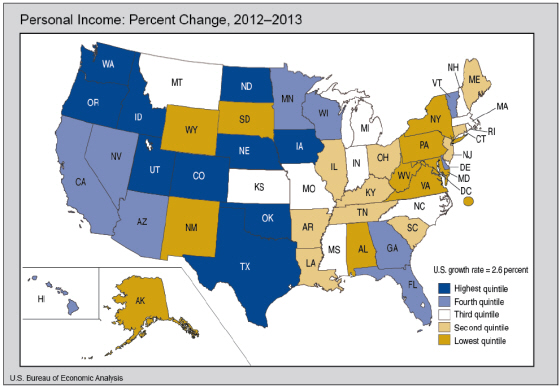 The BEA news release also summarized data for per capita personal income.   Arkansas per capita income was $36,086, up 1.8% from 2012.  This figure represents approximately 81% of the national average.  Arkansas’ rank among the 50 states dropped from 45th to 46th. 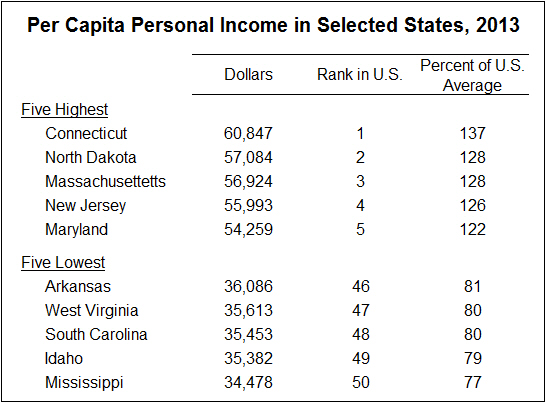 (Note:  If it were included in the state rankings, the District of Columbia would be ranked #1 with a per capita income of $74,513 — more than 67% above the national average.)

Earnings by Industry
Total earnings in Arkansas increased by 2.9% in 2013, compared to 3.4% nationwide.*  The table below summarizes earnings by industry.  Comparing Arkansas with the U.S. total, notable sectors of weakness included construction and manufacturing.  Earnings in several service-providing sectors in Arkansas exceeded nationwide growth rates; particularly in the categories of professional and business services.  Farm income in Arkansas also outpaced the national average. 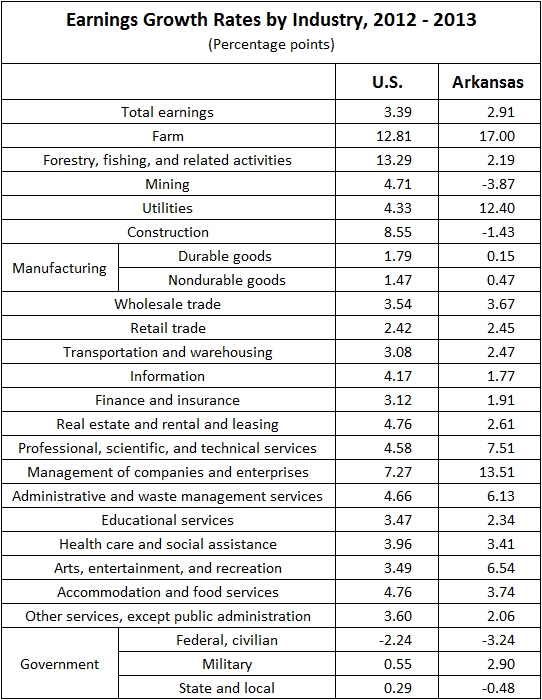 *Total earnings includes wages and salary disbursements, supplements to wages and salaries, and proprietors’ income.  It does not include dividends, interest and rent; or personal current transfer receipts — nor does it adjust for employer and employee contributions for government social insurance.