A new report from the Bureau of Economic Analysis shows that personal income in Arkansas rose by 1.2% in the second quarter of 2012, slightly higher than the U.S. average rate of 1.0%.  Growth was postitive in all 50 states, although it slowed in most states.  Arkansas growth rate was up from the previous quarter, and ranked the state as the 8th fastest-growing in the nation.  Over the past four quarters, cumulative income growth in Arkansas was 3.0%, just slightly lower than the 3.3% growth rate for the U.S.  With a CPI inflation rate of 1.9% for the same period, these figures represent postive real (inflation-adjusted) growth in incomes.

Revised data from the previous quarter also show an improved picture for Arkansas.  Previously reported at 0.3%, first quarter growth is now estimated to have been 0.9%.  The revisions show a particularly large adjustment to farm income:  The new report shows farm income expanding 1.2% in the first quarter instead of contracting by 28.6% as originally reported.

Today’s report also included comprehensive revisions for 2009 through 2011.  As shown in the figure below, the revised data show that incomes fell more sharply during the recession (-4.7%) than previously estimated (-3.3%).  The revised data also show a more variable growth path during the subsequent recovery. 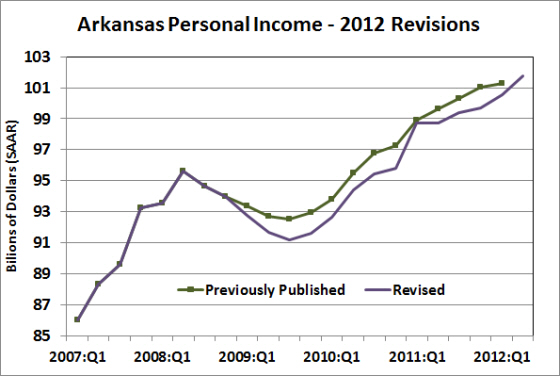 The revised data continue to show that Arkansas incomes were not as hard-hit by the recession as the national average, but cumulative growth during the recovery has been somewhat slower.   As of the second quarter of 2012, incomes in both Arkansas and the U.S. were up 6.4% from the previous cyclical peak (2008:Q2). 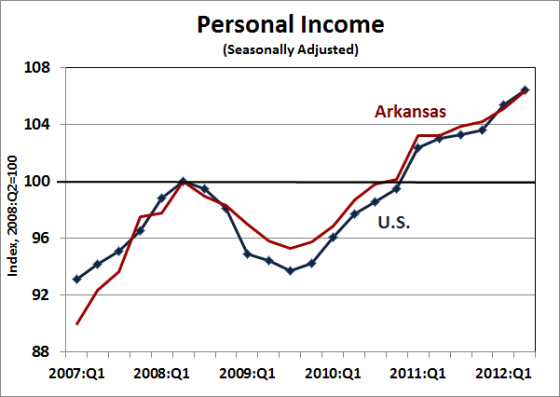 Today’s report shows that earnings growth was up 1.0% for the quarter, compared to a 0.8% growth rate for the U.S.  Earnings growth was positive for nearly every industry in Arkansas, with only nondurable-goods manufacturing and military pay showing slight declines. 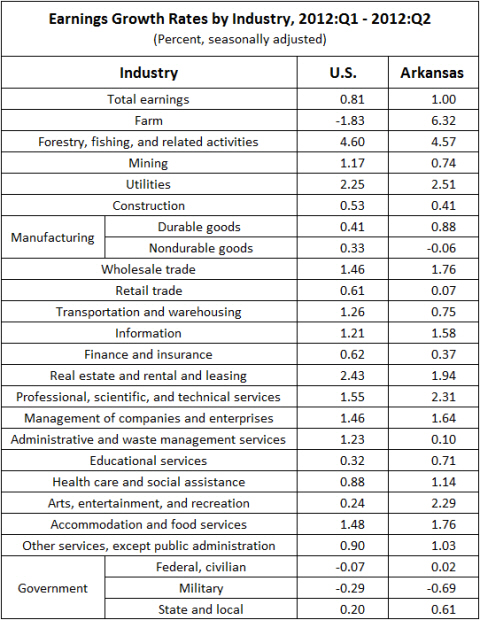