The unemployment rate in Arkansas was unchanged in August, remaining at 7.3%.  According to the news release from the Bureau of Labor Statistics, 26 states saw increases in unemployment, 12 states saw decreases, and Arkansas was one of 12 states where the rate was unchanged.  Both employment and unemployment were down for the month, with the labor force declining by 3,600.  In percentage terms, this is nearly identical to the labor force contraction that was widely noted in the national unemployment statistics released two weeks ago.  From July 2011 through May of this year, Arkansas had been running counter to the national trend with labor force participation rising steadily.  August represents the third consecutive monthly decline. 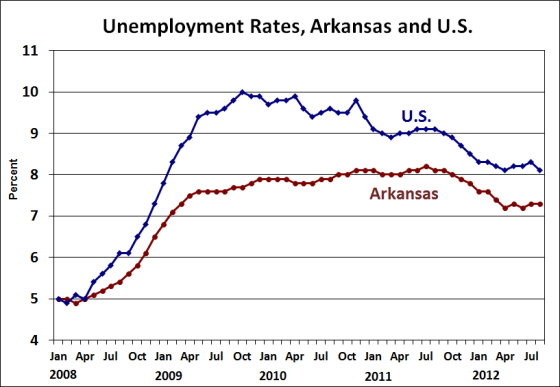 Information from the payroll survey was a bit more upbeat.  Total employment was up 2,600 for the month (seasonally adjusted).   Construction employment alone was up by 2,000, reversing the sharp decline that we saw in July.   Employment in several service sectors also increased, including Education & Health Services and Leisure & Hospitality Services.  Government employment was also higher, with net increases in Federal, State, and Local government hiring.

On the down side, employment contracted in both Wholesale and Retail trade sectors (-1,200 combined) and was also down in the Manufacturing sectors (-1,300).  Manufacturing job-losses were present in both durable and nondurable goods production.

On a year-over-year basis, payroll employment is up by around 10,000 jobs, but most of that increase took place in the final months of 2011.  Total employment in August was essentially unchanged from its level at the beginning of 2012. 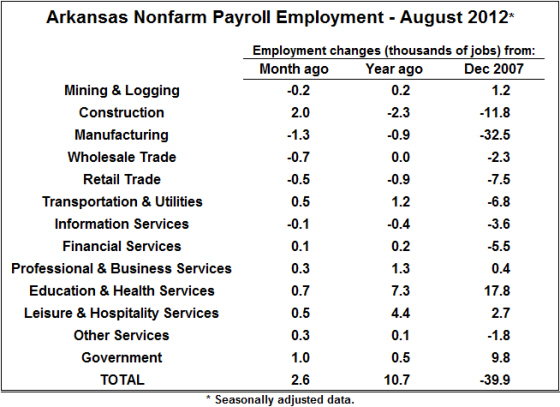 Overall, the data from August reinforce the view that the steadily improving conditions we saw in Arkansas labor markets during the second half of 2011 and the first part of this year have given way to relative stagnation.  The unemployment rate is stuck in the range of 7.1 to 7.3, and payroll employment is similarly showing no clear trend in recent months.