The Arkansas Realtors® Association just released new sales figures for July and August.  July home sales were essentially unchanged from the previous year, while August sales were down 5.6% compared to August of 2011.  The sales downturn in August overstates recent weakness in the market:  As shown in the figure below, sales were particularly strong in August 2011, so the percentage change reflects relative strength last year as much as it does relative weakness this year.  Nevertheless, cumulative year-to-date sales as of August are down 2.0% from last year’s totals. 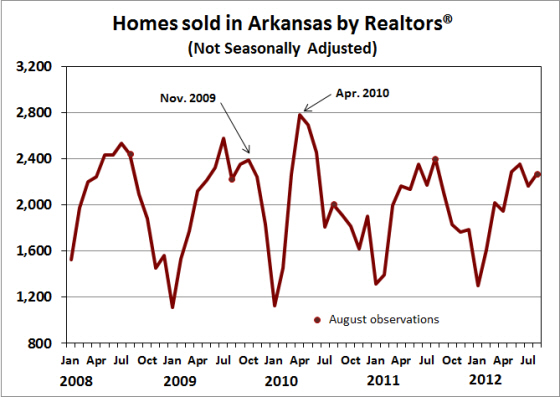 After seasonal adjustment, the sluggish sales growth of recent months is even more apparent.  On a seasonally-adjusted basis, monthly home sales have been fluctuating within a range of 1,800 to 2,100 per month for the past year or so.  Sales appeared to be slowly trending upward in the second half of 2011, but slowed somewhat in the spring and summer of this year. 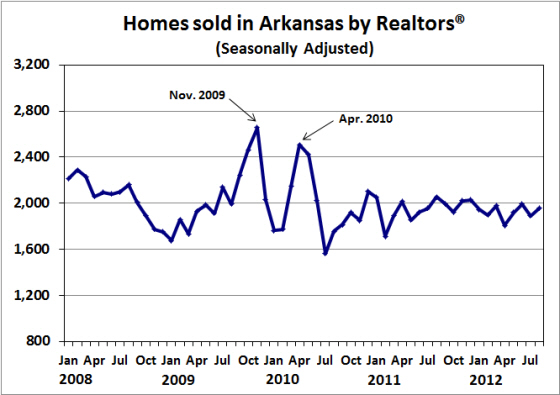 Recent sales reports seem to suggest a shifting of sales activity around the state.  Some of the larger real estate markets that were rebounding strongly a year ago have been areas of slower sales this year.  For example, the central Arkansas counties of Pulaski, Saline and Faulkner were showing double-digit sales growth in mid-2011, but have slowed or contracted slightly in the latest monthly reports.  The same pattern seems to characterize Craighead County home sales.   On the other hand, the Northwest Arkansas counties of Benton and Washington are among the stronger performers in recent sales reports, compounding gains from last year.  This rebound is welcome — and not particularly surprising — in light of the fact that Northwest Arkansas markets were hit harder by the housing market collapse and subsequent recession.

The real estate reports from July and August also documented sharp increases in median sales prices.  In July, the median price was up 13.3% and in August it was up 17.3%.  These increases reflect a combination of factors.  First, they suggest that the higher-priced end of the housing market is showing more activity — this includes the impact of higher relative sales volumes in Northwest Arkansas.  The higher sales prices also reflect the general improvement in home values, as evidenced by recent home-price data from the FHFA.

With home prices appearing to have bottomed-out and with mortgage rates at historic lows, conditions appear favorable for a sharper rebound in home sales.  Factors holding back home sales include tight credit conditions and weak household balance sheets.  Improving labor market conditions should help surmount these obstacles over time.