New data from the Bureau of Labor Statistics show unemployment rates trending downward across most of the U.S. — and Arkansas is no exception.  The statistics for August show unemployment lower than the previous year in 325 of the nation’s 372 metro areas.  As shown in the table below, unemployment rate declines in Arkansas ranged from -0.6% in Fort Smith to -1.4% in Pine Bluff. 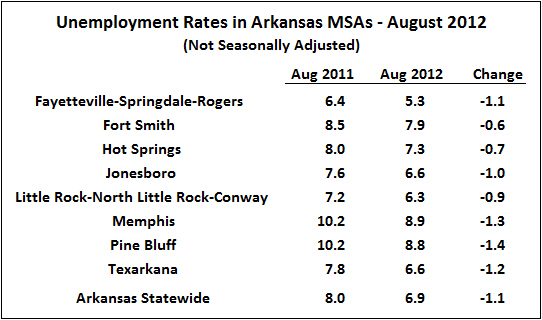 A quick comparison of August with the July unemployment rates would seem to suggest dramatic monthly declines; however, these changes primarily reflect recurring seasonal patterns — and the conventional unemployment measures for metro areas are not seasonally adjusted.  In this case, an important factor the start of the school year, when many teachers and students return to work or leave the labor force.  As a point of comparison, the headline unemployment rate statewide was unchanged in August at 7.3% (seasonally adjusted) while the not-seasonally-adjusted data showed a monthly decline of 0.9%.

Looking instead at the BLS’s smoothed seasonally adjusted estimates (below) we get a more accurate view of month-to-month changes.  From July to August, the seasonally adjusted figures show declines in Fayetteville, Hot Springs, Little Rock, Memphis and Pine Bluff.  The rate was unchanged in Jonesboro and Texarkana, while it increased in Fort Smith. 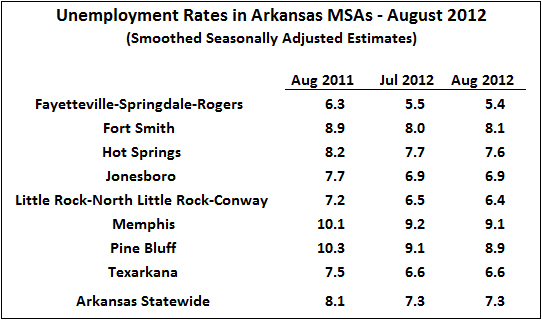 The following chart shows the trends in seasonally-adjusted unemployment rates over the past three years.  Rates have generally been in decline since autumn of 2011, although there has been some recent increases in Memphis and Fort Smith. 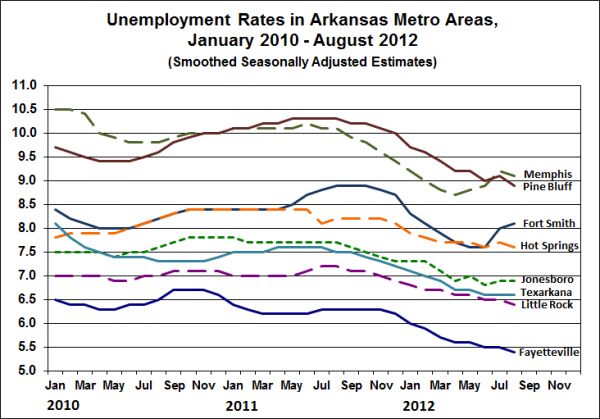 Payroll Data
Information from the survey of employers showed a wide range of employment changes among the state’s metro areas.  Texarkana showed a sharp monthly decline, with smaller contractions in Fort Smith, Hot Springs and Little Rock.  Employment was up in Memphis, Fayetteville, Pine Bluff , and especially Jonesboro.  Compared to a year earlier, employment was higher in six of the eight metro areas.  Relative to employment levels at the start of the recession, Arkansas now has three metro areas that have shown positive net job growth. 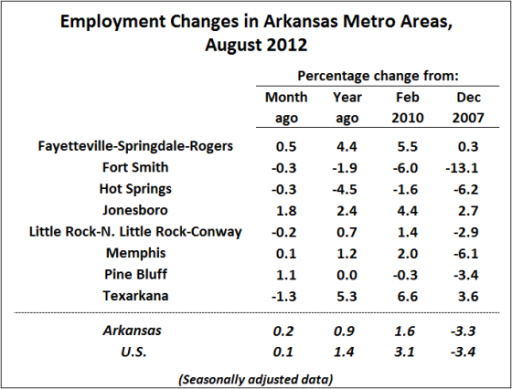