New data from the Federal Housing Finance Agency shows Arkansas house prices rising, albeit at a slower trend than the rest of the nation.  The most comprehensive of the FHFA’s house price indexes — the Expanded-Data Index — shows that Arkansas house prices rose 1.6% in the first quarter of 2014, slightly higher than the 1.4% pace for the U.S.  Over the past four quarters, however, Arkansas prices have risen a total of only 0.9%, compared to a nationwide rate of 7.0%.  Since the trough in house prices in 2011:Q2, prices in Arkansas have risen by 10%, while the average U.S. increase was 15.5%. 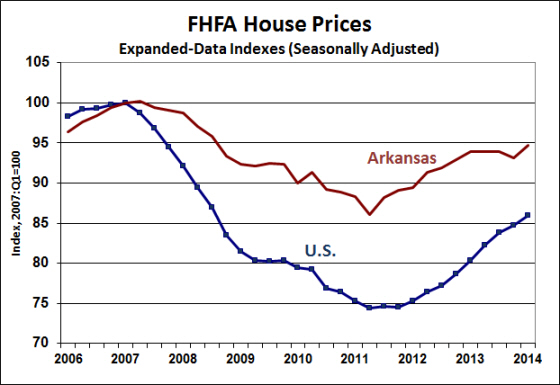 The slower rate of appreciation in Arkansas house prices mirrors a slower rate of depreciation during the house-price collapse of 2007-11.   From 2007:Q1 through 2011:Q2, house prices in Arkansas declined 14%, while average prices for the U.S. declined by over 25%.  In markets where price declines are the largest, the rate of recent appreciation has been the most rapid.  For example, prices in Arizona declined by 46% from 2007 to 2011, and have recovered by 31% since.

The same general pattern is true for metropolitan areas within Arkansas.  The Fayetteville-Springdale-Rogers metropolitan area suffered the largest price declines in the state, dropping by nearly 20% during the period of depreciation (FHFA All-Transactions index).  Since 2011:Q2 prices in Northwest Arkansas are up 8.1%.  Meanwhile, prices in the Little Rock metro area are up only 3.3% from trough, after a net decline of only 1.2% during the nationwide house price decline. 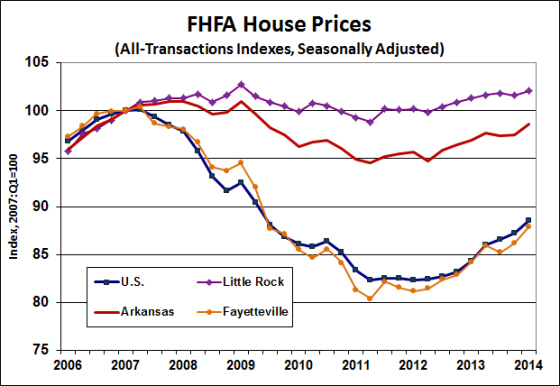 House prices in Arkansas’ other metro areas have generally changed little over the past several years.  Prices in Pine Bluff, Fort Smith, Jonesboro and Hot Springs continued to appreciate after the nationwide peak in early 2007, but only Texarkana and Jonesboro have seen positive appreciation over the most recent 5-year period.  More recently, prices have been weakening in Jonesboro (down 2.2% over the past year) and in Hot Springs (down 3.5%). 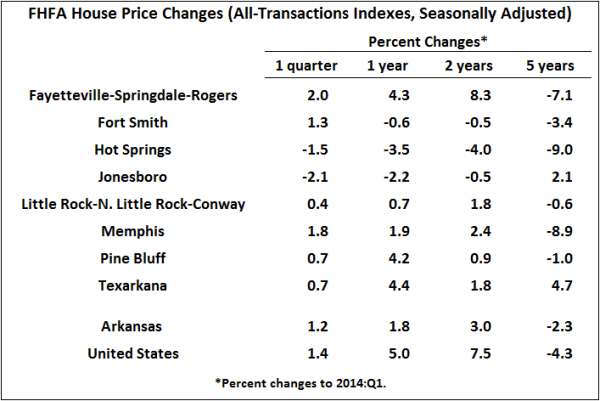