The unemployment rate in Arkansas fell three-tenths of one percent in April to 6.6%, the lowest unemployment rate since December 2008.  The relatively sharp decline corresponds to a 0.4% drop in the national unemployment rate in April.  For both the state and the nation, however, the news of a sharp declines in unemployment rates is not unambiguously positive:  the declines took place in the context of sharp drops in the size of the labor force.  For Arkansas, specifically, the number of unemployed declined by over 5,000 but there was no corresponding increase in household employment.  In fact, the number of employed declined by 3,200.  Although the report represents only one month of data, the concern is that the drop in unemployment was caused by discouraged workers leaving the labor force (or the state).

Over a slightly longer term perspective, April represents a set-back relative to the positive trends that have prevailed for the past several months.  Since August 2013, the number of employed is still up by more than 12,800 and the number of unemployed is down by 15, 280.  But these changes imply that the labor force has declined, on net, by over 2,400. 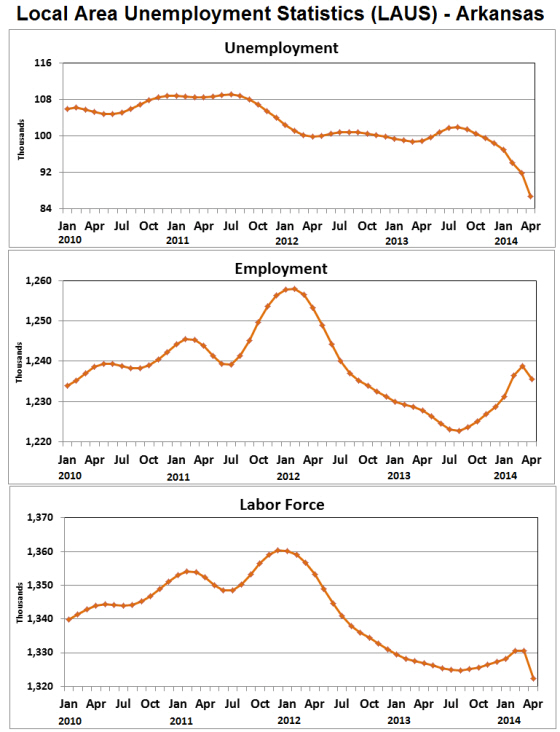 Payroll Employment
Data from the payroll survey concurred with the household survey’s lack of employment growth:  Nonfarm payroll employment declined slightly in April (-500, seasonally adjusted).  Declines were spread across several service-providing sectors, including a drop of 1,300 in Leisure & Hospitality services.  On the other hand, goods-producing sectors added jobs in April.  Manufacturing and Construction showed gains for the month, and employment in both sectors remain higher than levels of a year ago. 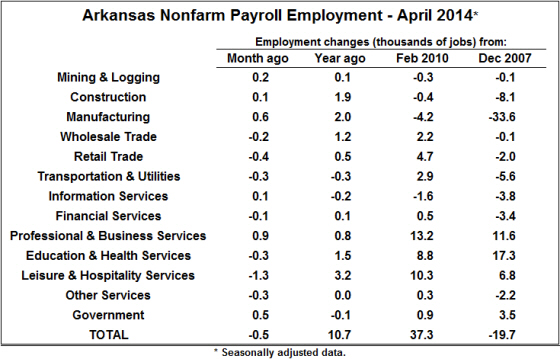