The latest data from the Federal Housing Finance Agency (FHFA) shows a continuing upward trend in Arkansas house prices, albeit at a slower rate than the U.S. average.  The FHFA’s “Expanded Data Indexes” showed that Arkansas house prices rose 0.5% in the third quarter compared to an increase of 2.2% nationwide (seasonally adjusted).ⁱ  Over the past year, house prices were up 2.6% in Arkansas and up 8.8% for the entire U.S. 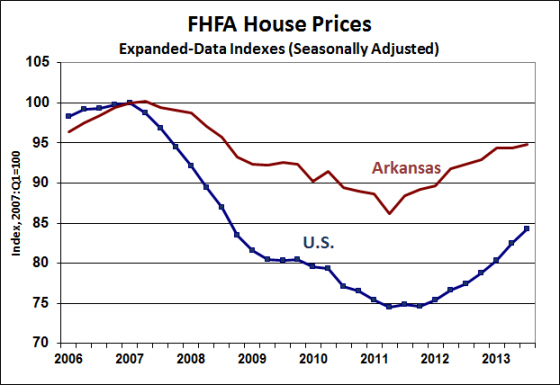 According to the “All-Transactions Index,” which includes home purchases and refinancings through FannyMae or FreddieMac, Arkansas house prices were down slightly for the quarter (-0.3%), but still up 2.2% over the past year.ⁱ  Among the state’s metropolitan areas, prices were down everywhere except Jonesboro and Little Rock.  But even after a 1.1% decline in third quarter, prices in the Fayetteville-Springdale-Rogers metro area were 3.2% higher than a year earlier. 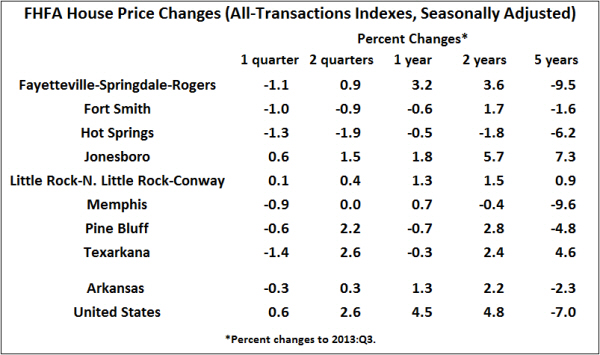 As illustrated in the figure below, the longer-term trends in house prices differ considerably among metropolitan areas.  The two-year growth rate of 3.6% in Northwest Arkansas represents a sharp reversal of the declining trend in 2007-2011.  On the other hand, the two-year growth rates of 5.6% in Jonesboro and 2.4% in Texarkana represent continued rising prices.  In fact, the nationwide collapse of housing prices preceding and coinciding with the recession was evident only in Fayetteville and Memphis (with a delayed downturn in Hot Springs). Compared to the first quarter of 2007, house prices are higher in Texarkana, Jonesboro, Fort Smith, Little Rock, and Pine Bluff. 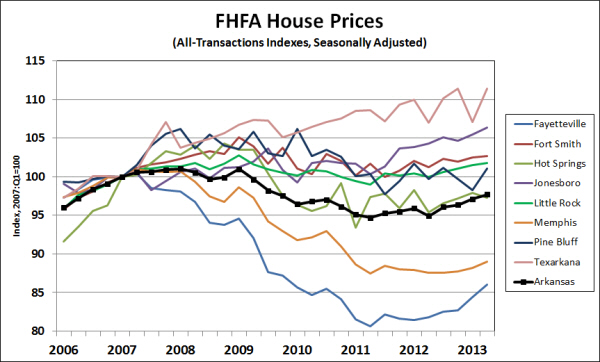