Still catching up with the backlog from the government shutdown, the Bureau of Labor Statistics last week released data for metro area employment and unemployment for both September and October.  Not surprisingly, unemployment rates rose in October as federal workers and contractors on furlough were classified as unemployed.  The smoothed seasonally-adjusted metro area estimates show that unemployment in October increased by 0.3% in Hot Springs and Pine Bluff, and by 0.2% in Little Rock.  Fort Smith was the only metro area in the state that did not see an unemployment rate increase in October.  In fact, Fort Smith’s rate was down by one-tenth from August. 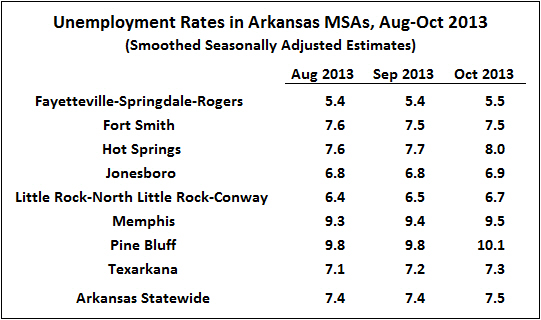 Over the past year, unemployment rates in Arkansas have been on the rise.  Statewide, the rate has risen from 7.2% in October 2012 to 7.5% in October 2013.  Among the state’s metro areas, only Fort Smith has seen a net decline in unemployment over the same period, while Jonesboro was unchanged.  Unemployment rates have risen in all of the other seven metro areas, with notable increases in Pine Bluff, Texarkana, Memphis and Hot Springs. 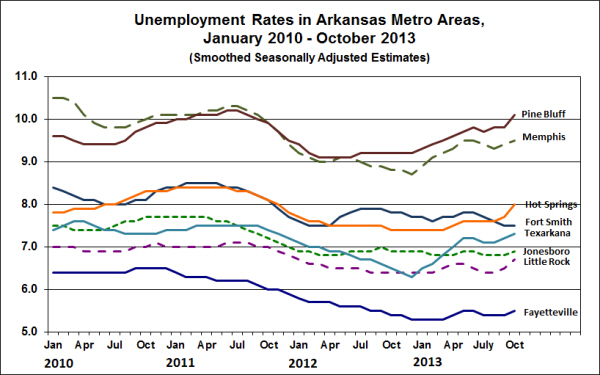 Payroll Employment
Payroll employment figures (which should not have been affected by the government shutdown) showed some sizable gains in October.  Employment in October rose by more than 1% in both Pine Bluff and Fort Smith.  The increase in Fort Smith came on top of an increase in September as well.  The only metro areas that saw a decline in payrolls for October were Hot Springs and Memphis.  Compared to a year ago, employment was higher in all metro areas except Pine Bluff and Hot Springs. 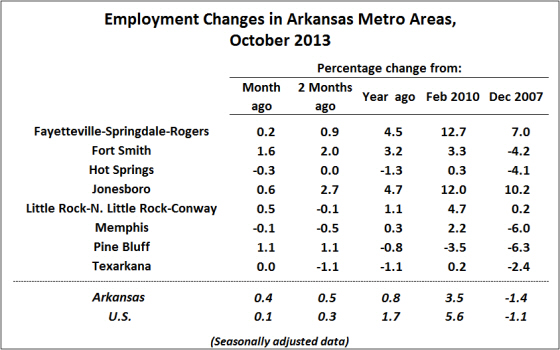