This morning’s reports from the U.S. Bureau of Labor Statistics and the Arkansas Department of Workforce Services were mixed, with contradictory signals from the household and payroll reports continuing to confound clear interpretation of the data.  Due to the federal government shutdown in October, release of the September data was postp0ned to coincide with the October release, so we have two months of statistics to consider.

Household report:
The headline statistic was an uptick in the Arkansas unemployment rate in October– to 7.5%.  September’s unemployment rate was unchanged from the previous month at 7.4%.  The October increase coincided with a rise in the national unemployment rate from 7.2% to 7.3%, and can be at least partly attributed to the government shutdown.  Although the BLS has described some ambiguity in the survey results for October, most government workers who were furloughed over the first part of the month appear to have been correctly classified as being temporarily unemployed.

Recent trends in Arkansas employment, unemployment and labor force participation continued over during September and October.  The number of employed declined by more than 2,800 over the two-month period, while the number of unemployed increased by over 1,200.  Accordingly, the Arkansas labor force contracted by approximately 1,600 workers.  As shown in the set of charts below, these trends are alarming.  The household survey data are showing that the number of employed has dropped by over 44,000 since January of 2012, along with a labor force decline of 46,000 over the same period.  The number of unemployed — which had been in decline in 2012 and early 2013 — has increased by 4,500 since April. 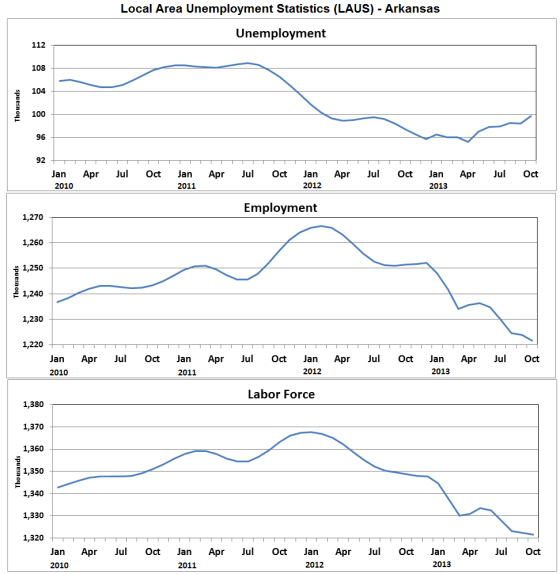 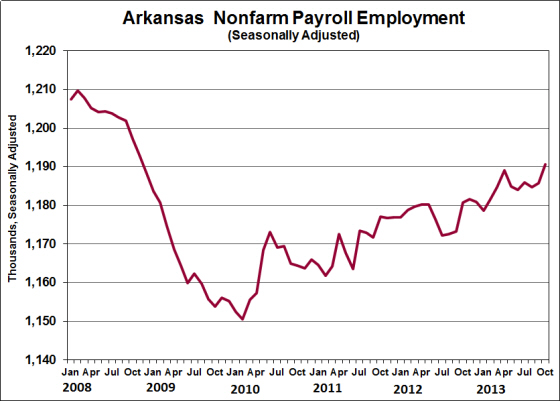 Payroll employment gains were distributed across several service-providing sectors, along with a two-month net increase in manufacturing employment.  Growth in transportation and utilities was particularly robust, accounting for 2,600 jobs.  Employment in retail trade also experienced a strong gain (+1,600).  Overall, payroll employment in October was up more than 40,000 since the employment trough of February 2010, but still approximately 17,000 below pre-recession levels. 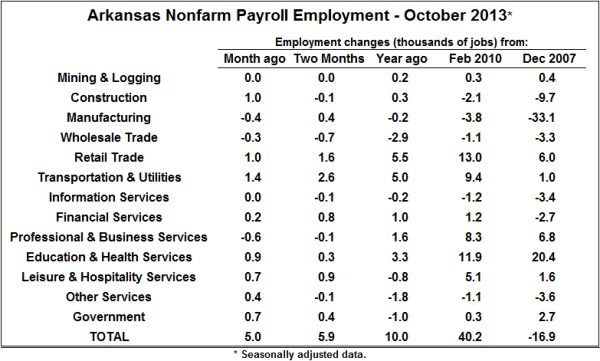 The contrast between the trends in the payroll and household surveys is something of a puzzle.  Both are based on survey data, and are subject to both sampling and non-sampling error.  But additional information from the Quarterly Census of Employment and Wages (QCEW) appears to more consistent with the payroll data than the household data.  So although it is possible that the payroll employment figures will eventually be revised downward, it appears unlikely that they will be revised to show anywhere near the job losses that the household data are showing.

*Seasonally adjusted data for Arkansas nonfarm payroll employment, reported in a format compatible with the monthly news release from the Arkansas Department of Workforce Services, can be found at the following links:  September and  October.