The Arkansas Realtors® Association announced this morning that home sales in November 2013 were down 2.8% from the previous year.  There are at least two reasons that this report should not detract from the overwhelmingly upbeat year that 2013 represented for Arkansas home sales.  First, November is typically one of the lower sales months of the year.  As shown in the not-seasonally adjusted data below, most of the sales in any given year are concentrated in the summer months, with November through February being relatively slow (the exception being November 2009, when the Federal home-buyer’s tax credit boosted sales late in the year).  With such a strong summer season in 2013, a seasonal slowdown toward the end of the year will have little effect on annual totals. 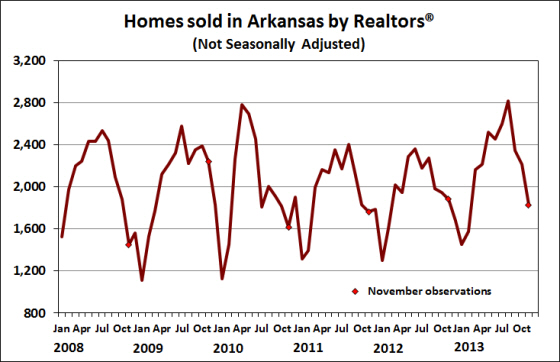 The second reason to remain upbeat about the November 2013 sales report is the fact that November 2012 was a relatively strong sales month.  The rising trend in home sales that became evident in mid-2013 actually began in late 2012, with November being the strongest month of 2012 in seasonally-adjusted terms.  As illustrated in the seasonally-adjusted graph below, the November 2013 report does represent a drop-off from the rapid sales pace earlier in the year, but it remains above the lackluster trend that we saw from late 2010 through mid-2012. 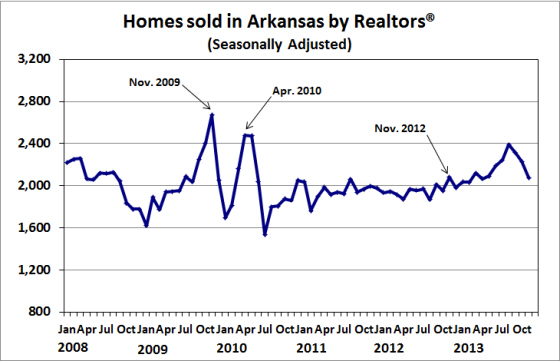 This morning’s report showed that year-to-date sales remained 11.8% higher than in 2012.  With only one month’s data remaining to be tabulated, it is clear that home sales in 2013 will represent a double-digit rate of increase from the previous two years.