The latest employment report from the U.S. Bureau of Labor Statistics and the Arkansas Department of Workforce Services might appear disappointing on the surface, but there were some positive developments.  Despite an unemployment rate that was unchanged at 7.5% in November, the underlying data from the household survey moved in the right direction:  the number of employed was up by nearly 4,400 and the number of unemployed was down by almost 700.  The net change in the labor force was an increase of approximately 3,700. As shown in the set of figures below, these monthly changes represent a welcome departure from the overall trends we’ve been observing since the beginning of 2012. 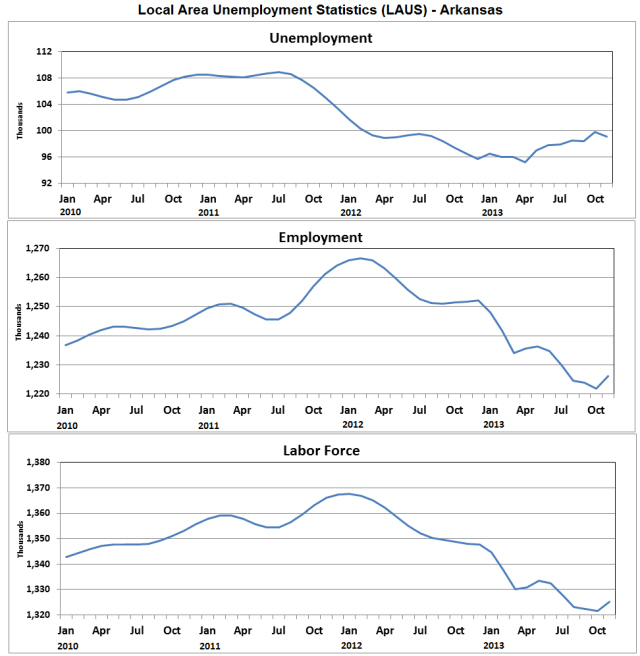 To some extent, it was disappointing that we did not see a drop in the unemployment rate.  The statistics for October had been distorted by the federal government shutdown.  On the national level, the unemployment rate ticked up one-tenth of a percent in October, then dropped by three-tenths of a percent in November.  In Arkansas, we saw the October increase but remained stuck at 7.5% in November. 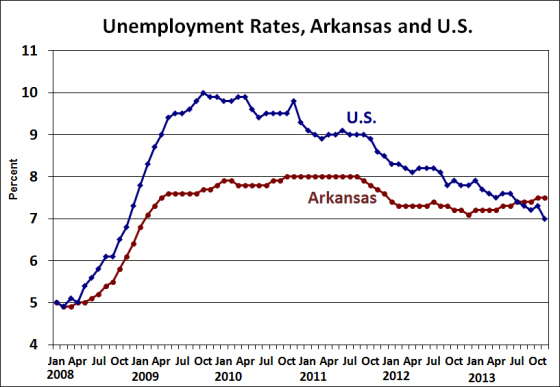 Payroll Survey:
The report on nonfarm payroll employment was also somewhat encouraging this month:  employment was up 3,000 in November (seasonally adjusted) and the figures for October were revised upward by 1,500.  As shown in the table below, employment increased in several sectors, including Professional & Business services, Leisure & Hospitality, Education & Health, and Construction.  Over the past 12 months, the payroll survey is showing a net increase of 13,500 jobs. 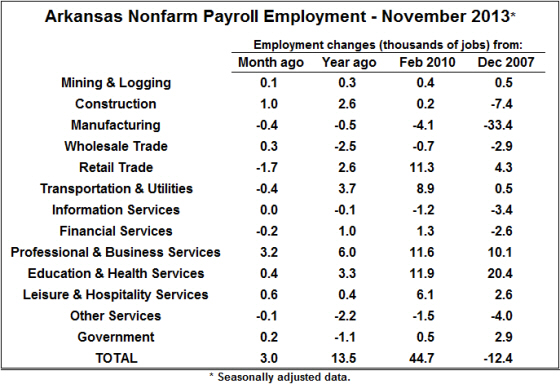 Contrasting Trends and Data Revisions:
As previously noted, the household and payroll surveys have been showing dramatically different trends over the past two years.  Since January 2012, the household survey has shown a net decline of nearly 40,000 employed, while the payroll survey has registered an increase of 18,200.  There can often be a discrepancy between two reports over short periods of time, but a divergence of this magnitude and duration is unusual.  The monthly data for November showed the two series moving in the same direction, but the cumulative deviation remains substantial.

Some new data from the Quarterly Census of Employment and Wages (QCEW) released this week might help reconcile the conflicting trends — but not by much and not in an encouraging way.  The data from the QCEW are used to periodically revise the payroll statistics.  This “benchmark revision” takes place once per year, with the revised data released in March.  Previously released data from the QCEW had suggested that revisions to the payroll statistics for 2013 would be minimal.  However, the latest release showed a downward revision for the first quarter of 2013, along with a stagnant second quarter.  As a result, it now appears likely that the 2013 payroll statistics will be revised sharply downward.

The figure below illustrates the diverging trends of the household and payroll statistics, along with a projection of how revised payroll data are likely to affect the comparison.  The revision is expected to lower the level of measured payroll employment by over 15,000 (as of June 2013).  As a result, the cumulative change in payroll employment from January 2012 through November 2013 is likely to be approximately +2,500 (down from the +18,200 change in the currently-reported data).  This would partly close the gap between the household and payroll employment numbers, but a discrepancy of over 42,000 jobs would remain. 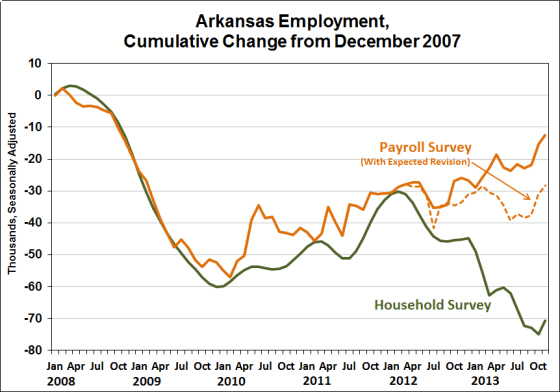 Sources: Bureau of Labor Statistics (LAUS, CES, QCEW), with calculations by the Institute for Economic Advancement