The Arkansas Realtors® Association (ARA) announced this morning that March home sales were up 7% from the previous year.  Sales in the first two months of the year had been somewhat volatile, with year-over-year sales up 11.6% in January but down 1.6% in February.  As shown in the figure below, home sales typically start out slow in the early months of the calendar year, reaching a peak in the summertime.  The sharp ramp-up in March bodes well for the outlook for the rest of the year.  In fact, the volume of sales in March 2013 was the highest level we’ve seen for that month since 2010, when the Federal home-buyer’s tax credit was in its penultimate month. 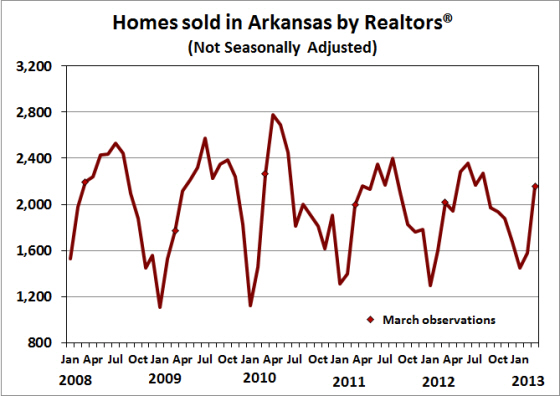 After seasonally adjusting the data, the zero-growth trend in home sales over the past two years is evident.  But seasonally adjusted sales in March were well above the 2000 homes-per-month pace that seems to have constrained the market in 2011 and 2012. 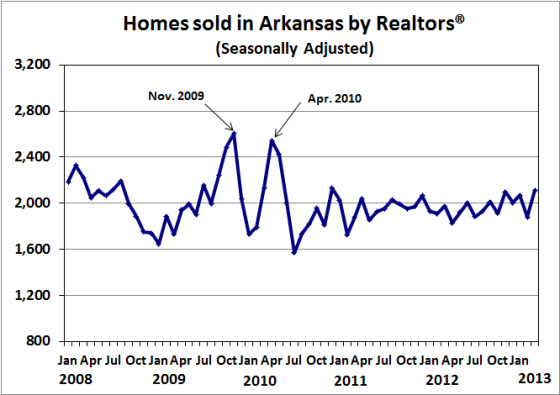 Perhaps the most important aspect of this morning’s report is the cumulative sales total for the first quarter of the year.  The ARA statistics showed a 5.2% increase in year-to-date sales compared to 2012.  After seasonal-adjustment of the quarterly data, the figure below shows a sharp upturn in 2013:Q1. 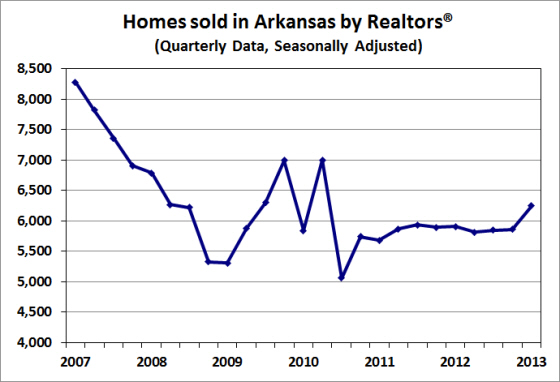 Home sales and residential construction have been among the weakest sectors in the current economic recovery, in spite of historically low mortgage rates and relatively low home prices.  The home sales data for January through March of 2013 suggests that the long-awaited recovery in Arkansas residential real estate markets might finally be emerging.