Information from last week’s General Revenue Report suggested continued slow growth in Arkansas Taxable Sales.  Sales and Use tax collections in April were down 2.5% from April 2012, and were 6.5% below forecast.  For the first quarter of 2013, Arkansas Taxable Sales (ATS) increased 0.2% from the previous quarter (seasonally adjusted).  Following a 3.3% increase in the first quarter, ATS is now up 0.5% from the previous year, having offset the declines we saw in the second and third quarters of 2012.

Sales of gasoline were up 0.3% in 2013:Q1, so the gasoline component of Arkansas Taxable Sales Including Gasoline (ATSIG) had little effect on the total.  ATSIG was up 0.2% from the previous quarter and was unchanged from the previous year. 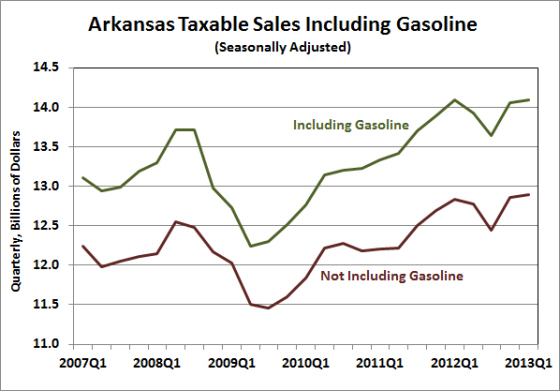 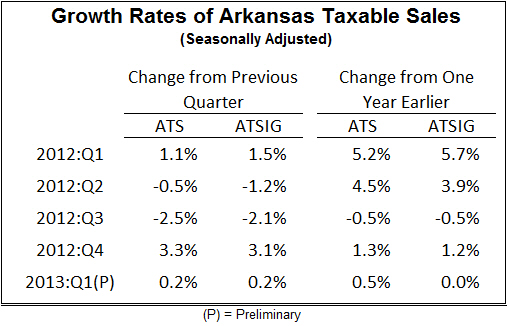 * Data are preliminary until the release of the DFA report, Arkansas Fiscal Notes for April 2013, and will be updated when information becomes available.   The preliminary data also include model-based estimates of gasoline sales for March.  Final figures will incorporate official estimates from DFA’s Motor Fuel Tax section.