Yesterday’s report from the Arkansas Realtors® Association showed that March home sales were up 1.1% from a year earlier.  In the highly seasonal pattern of home sales, March is typically the beginning of a spring surge leading up to the peak summer sales months.  As shown in the chart below, that pattern is holding true this year with March sales only slightly ahead of last year’s pace.  Since the sharp downturn in sales leading up to the recession of 2008-09, last year was the first year in which the market was not supported by Federal home-buyers’ tax credits, making it the lowest sales-year in recent history.  (Sales were boosted primarily in the terminal months of the tax credit programs:  November 2009 and April 2010.)  Starting from the low base in 2011, sales are expected to show a fairly sizable improvement in 2012. 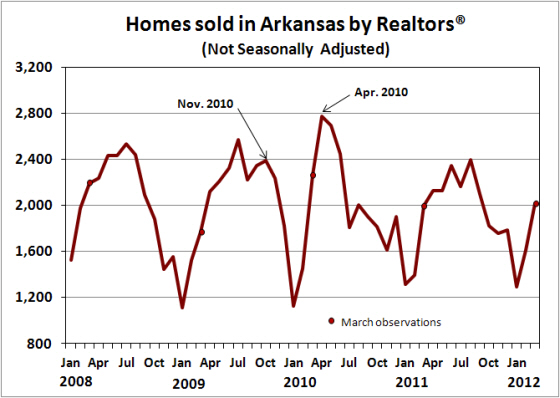 After applying statistical techniques to adjust for seasonal patterns, recent trends become more apparent.  Following a post-tax-credit “hangover” and subsequent rebound, sales have been slowly but steadily increasing during 2011 and 2012.  Monthly observations show that February and March are down slightly from the January sales pace.  However, the not-seasonally-adjusted patterns make it clear that January contributes little to the total annual sales pace. 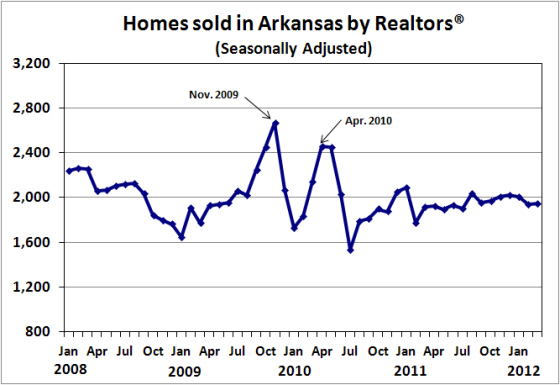 Month-to-month changes are subject to considerable variability:  A few days difference in closing dates can result in home sales being recorded in one month or another.  Hence, it is often useful to look at quarterly totals to evaluate recent trends.  In the quarterly chart below, the steady increase in home sales even more evident.  Yesterday’s news release from the Arkansas Realtors® Association emphasized this quarterly perspective, reporting that first quarter sales were up 6% from the previous year — a summary that accurately summarizes the first-quarter sales pace. 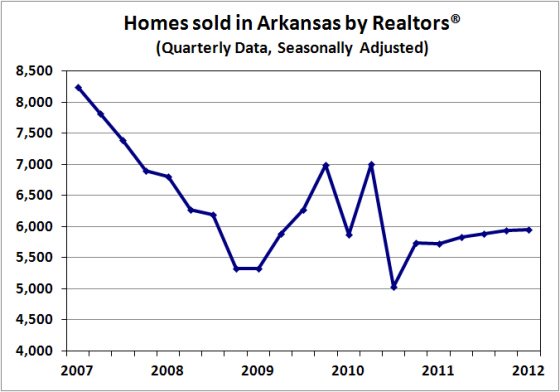 Although sales have been steadily improving, the first quarter total was slightly lower than the most recent forecast posted on these pages.  Nevertheless, total sales for 2012 will depend far more heavily on market activity during the peak summer months.  Stay tuned.