Recently-released sales tax data from the Arkansas Department of Finance and Administration indicate that Arkansas Taxable Sales (ATS) increased by 1.7% in the first quarter of the year (seasonally adjusted). ATS growth had slowed to zero in the latter half of 2010 and the first half of 2011, but the most recent observation represents the third consecutive quarter of impressive growth.  On average, ATS has increased at a 7.9% annual rate over the past three quarters.

Gasoline prices were up in the first quarter, averaging $3.44 for a gallon of regular unleaded (up 22 cents from the fourth quarter of 2011).  Seasonally-adjusted gasoline sales also increased.  As a result, spending on gasoline increased by 9.1% and Arkansas Taxable Sales Including Gasoline (ATSIG) increased by 2.3%.  ATSIG growth in the first quarter was stronger than expected, coming in 1.8% ahead of the pace implicit in the most recent forecast posted on the Arkansas Economist. 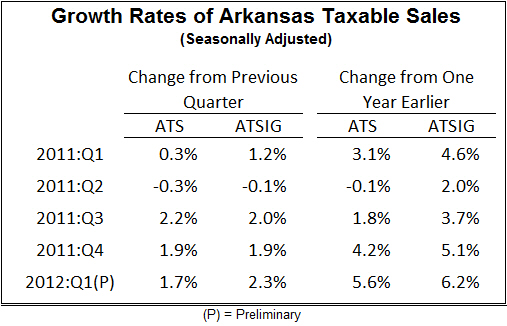 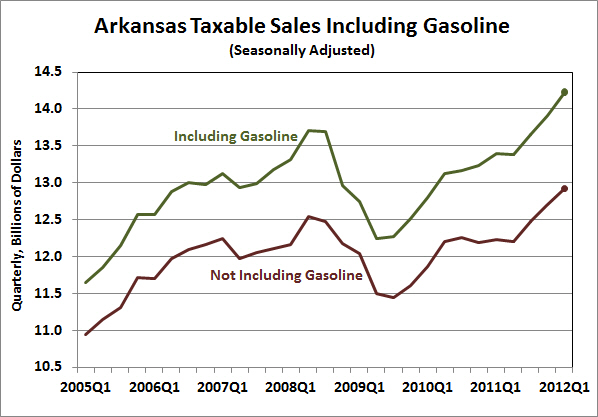 The growth of ATSIG continues to compare favorably to statistics on national retail sales.  According to recently-revised data from the Census Bureau, U.S. Retail Sales increased by a total of 5.3% over the past three quarters.  Over the same period, ATSIG increased by 6.3%. 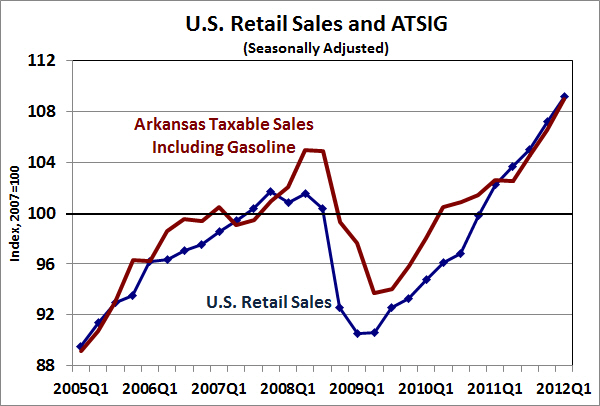 * Data are preliminary until the release of the DFA report, Arkansas Fiscal Notes for April 2012, and will be updated when information becomes available.