The National Association of Realtors® (NAR) released statistics on home sales by state yesterday.  The seasonally-adjusted data for Arkansas show second quarter sales unchanged from the first quarter and down 17.6%% from the second quarter of 2010.  Nationwide, home sales were down 5.4% from the quarter and down 12.7% from the previous year.  The year-ago comparisons are not surprising:  the second round of home-buyer tax credits expired in 2010:Q2, generating a surge in sales.

The NAR data are consistent with previously released reports from the Arkansas Realtors® Association (ARA).  The ARA data have shown home sales rising through the first half of the year, but this is a typical seasonal pattern.  As shown in the chart below, seasonally adjusted data reveal fairly stagnant home sales — well below the level of the previous year. 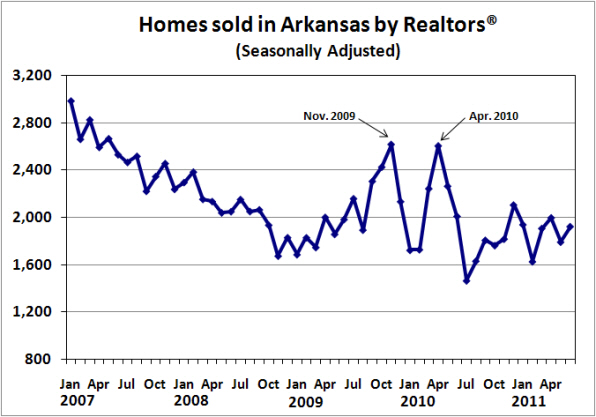 In fact, the NAR data and the ARA data — while based on different samples and methodologies — are showing a very similar pattern when placed on a comparable basis.  In the chart below, the ARA data is averaged by quarter and both series are indexed to equal 100 in the first quarter of 2009.  Prominent peaks in 2009:Q4 and 2010:Q2 mark the surges associated with tax-credit dates.  Both sets of data show a sharp drop-off in 2010:Q3, and slow sales since then. 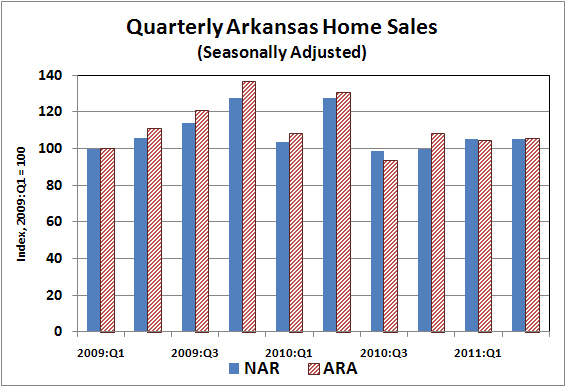