Arkansas Taxable Sales (ATS) registered another slow quarter in 2011:Q2, with the basic series (based on state sales tax data) showing a decline of 0.5% from the previous quarter (seasonally adjusted).  Following weak growth in the previous three quarters, the quarterly drop leaves ATS only 0.1% above the level of a year earlier. 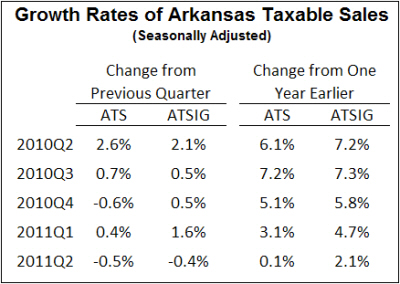 Source: Institute for Economic Advancement (based on data from the Arkansas Department of Finance and Administration and the Oil Price Information Service)

In the first quarter of the year, sharp increases in gasoline prices appeared to be a contributing factor to slow ATS growth of 0.4% (revised).  A measure of taxable sales that includes gasoline expenditures — Arkansas Taxable Sales Including Gasoline (ATSIG) — rose 1.6% from the previous quarter, suggesting that spending on gasoline was sapping some of the purchasing power that would otherwise have been reflected in the sales tax figures.  But the second quarter data show a decline in this broader measure as well (-0.4%).

Although Arkansas gasoline prices declined during the latter part of the quarter, falling from $3.74 in May to $3.50 in June, prices were higher on a quarterly average basis — $3.63 in the second quarter compared to $3.16 in the first quarter.  However, slow gasoline sales volumes kept ATSIG from growing much faster than the ATS measure without gasoline expenditures.  Relative to a  year earlier, ATSIG was up only 2.1% in the second quarter. 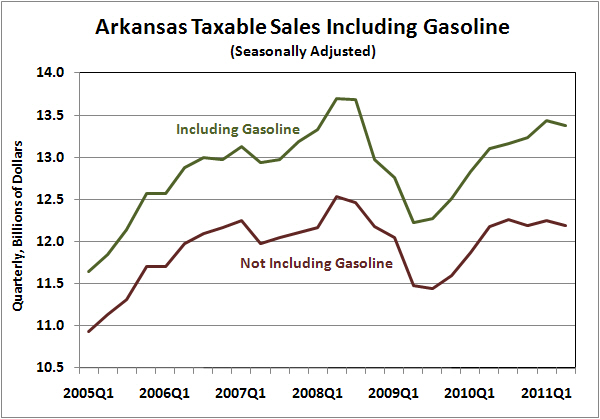 Source: Institute for Economic Advancement (based on data from the Arkansas Department of Finance and Administration and the Oil Price Information Service)

Nationwide retail sales growth slowed in the second quarter (from 2.5% in 2011:Q1 to 1.2% in 2011:Q2), but not as dramatically as the slowdown in Arkansas Taxable Sales.  As shown in the figure below, ATSIG had been showing growth commensurate with U.S. Retail Sales during the early stages of the economic recovery.  The data for 2011 indicate a troubling slowdown compared to the national statistics. 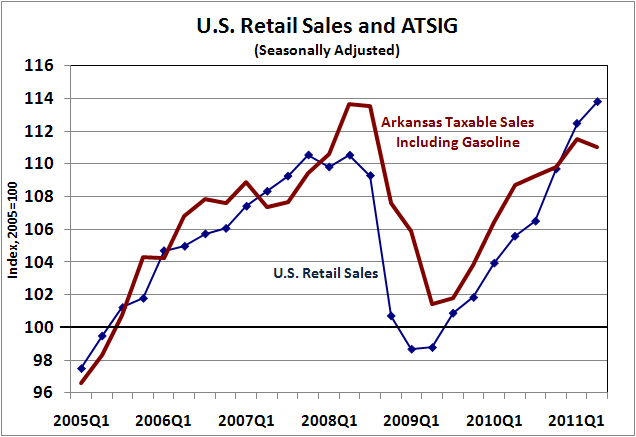 Recent reports on employment and unemployment in Arkansas have suggested economic weakness in the second quarter, and the statistics on Arkansas Taxable Sales provide corroborating evidence.  Forthcoming data releases for the second quarter should help to clarify the situation (e.g., Personal Income data for 2011:Q2 will come out next month).  Looking forward, recent declines in gasoline prices might relieve some of the strain on household budgets and contribute to a rebound in the second half of 2011.  Stay tuned.

Arkansas Taxable Sales (ATS) is calculated by the Institute for Economic Advancement to serve as a timely measure of Arkansas retail sales.  The series is derived from sales and use tax data, adjusting for the relative timing of tax collections and underlying sales, changes in tax laws, and seasonal patterns in the data.  Arkansas Taxable Sales Including Gasoline (ATSIG) incorporates data on the state motor fuel tax and gasoline prices from the Oil Price Information Service.

* Data are preliminary until the release of the DFA report, Arkansas Fiscal Notes for July 2011, and will be updated when information becomes available.