The Commerce Department reported yesterday that the median sales price of new houses sold in April was up 13.1% from a year earlier.  Separately, new data from the Federal Housing Finance Agency (FHFA) confirmed that home values are on the rise, both nationally and here in Arkansas.  As shown in the figure below, house prices continued their upward trajectory in the first quarter of 2013, rising 1.9% for the U.S. and 1.7% for Arkansas.  Compared to the first quarter of 2012, prices were up 6.4% nationally and 5.5% in Arkansas. 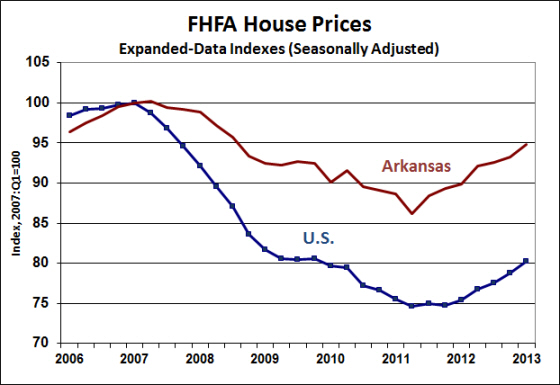 A Note on Methodology:
The “Expanded-Data Indexes” shown in the figure use data from all mortgages purchased or securitized by FannieMae and FreddieMac, augmented with data from local property assessors’ offices.  The FHFA measures are constructed as weighted, repeat-sales indexes (like the Case-Shiller Index).  This methodology is intended to estimate underlying trends in house values more accurately than simple measures such as median or average sales prices.

When it comes to measuring house prices for metropolitan areas, the FHFA publishes measures known as “All-Transactions Indexes,” which include information from actual home sales as well as home refinancings.  The published metro area data are not seasonally adjusted.  Theoretically, there should be no seasonal pattern to house prices:  As long-term durable assets, home values should not be affected by transitory and predictable short run variations.  However, measures of average or median prices often do display seasonal variation.  The explanation is that the mix of home sales varies seasonally, so that average house-price measures show increases during seasons when higher-value homes comprise a relatively larger share of total sales.  Although the weighted, repeat-sales methodology used by the FHFA is intended to control for these short-run fluctuations, it is quite possible for this seasonal effect to have in impact — particularly when there are relatively few underlying data observations.

With this possibility in mind, we tested for seasonality in the data for Arkansas’ Metropolitan Statistical Areas (MSAs).  Statistical tests rejected the presence of any stable seasonality, but did reveal evidence of small, time-varying seasonal fluctuations.  This was especially true for recent data, particularly during the period of relatively low sales volumes since the housing crash.  This is exactly the situation in which compositional variation might be expected to show through to the repeat-sales indexes.  Consequently, the MSA data presented below have been seasonally adjusted (using the standard Census X-12 ARIMA procedure) to provide a clearer view of underlying trends in Arkansas house prices.

Metro Area Data:
Seasonally adjusted measures of the FHFA all-transactions indexes show rising home prices in most, but not all of the state’s metro areas.  Quarterly growth rates were positive for all metro areas except Pine Bluff and Texarkana.  Both of these MSAs have experience cumulative price declines over the past two years; however, Texarkana house prices remain 3.8% above their level of five years ago.

Northwest Arkansas experienced that largest cumulative decline since the downturn in housing prices, but prices have been recovering, rising by more than 2-1/2% over the past two years. Prices have also been generally rising over the past two years in Fort Smith, Hot Springs, Jonesboro, and Little Rock.  House prices in the Memphis MSA have been fairly flat, and remain 12.4% below their levels of five years ago. 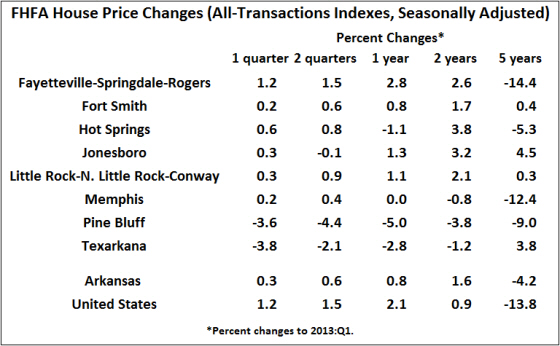 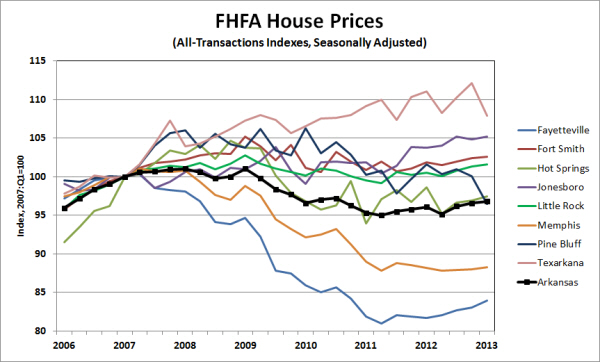 The recovery of house prices is a positive development for two related reasons:  First, the price increases suggest a long-awaited pick-up in demand.  The recovery of home values, in turn, is likely to spur additional sales activity:  discretionary buyers should be more willing to enter the market now that the underlying value of their potential investment is no longer depreciating.  Indeed, although it is still early in the sales year, home sales in 2013 appear to have gotten off to a good start.