The Bureau of Labor Statistics recently published some preliminary statistics on 2012 state unemployment rates – broken down by gender, race, ethnicity and age.  A comparison of Arkansas with the rest of the country yields some interesting observations.

As shown in the table below, the overall unemployment rate in Arkansas was one-half percentage point lower than the national average in 2012, and Arkansas ranked near the median among the 50 states plus District of Columbia.  For the U.S. as a whole, the 2012 unemployment rate was slightly higher for men than for women, but there was no gender difference in Arkansas. 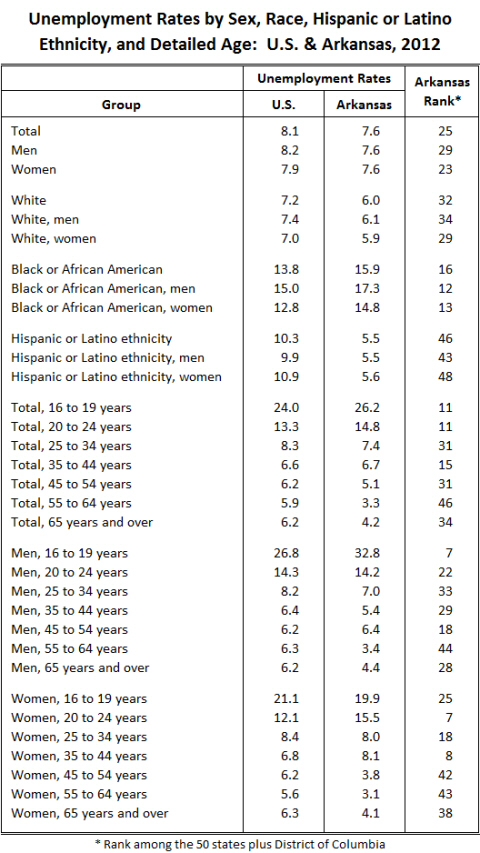 Among the various age groups, unemployment rates for men and women show some marked differences.  Among Teenagers (16-19), the rate for males is far higher than for females – and well above the national average.  Moving up just one age bracket, the pattern is reversed for 20-24 year olds.  There is also a sharp gender difference in the 45-54 category:  The unemployment rate for women is only 3.8% (compared to 6.2% nationally), while the rate for men is 6.4% — above the national average.

The unemployment rate is an important indicator of labor market performance, but my no means is it the best summary measure.  Labor force participation rates and employment-population ratios also provide important information about the employment status of various demographic groups that can help interpret the unemployment rate.  For example, we noted that unemployment rates among 55-64 year-olds is relatively low in Arkansas.  However, the participation rate for this cohort is only 51.6% in Arkansas, compared to 64.5% nationwide.  As a result, employed persons 55-64 years old comprise only 49.9% of the total population in that age bracket in Arkansas, but for the U.S. the employment-population ratio is 60.6%.  Hence, one reason that unemployment is so low for 55-65 year olds in Arkansas is that far fewer of the members of that cohort are in the labor force.

For those readers interested in looking at these figures in more detail, a supplemental table —  comparing the U.S. and Arkansas in terms of population shares, labor force participation rates, employment-population ratios along with unemployment rates – is available here (Excel spreadsheet)