Yesterday’s report on home sales included data showing that average home prices were up 7.8% from October 2011 through October 2012.  On a year-to-date basis, average prices were up 10.4%.  Average sales prices are not necessarily a good measure of overall home values — they sometimes simply reflect changes in the mix of homes that are presently selling.   If higher-price home sales are strong and lower-price home sales are lagging, we would see an increase in the average sales price even if overall home values are unchanged.

In this case, however, the realtors’ sales price data is corroborated by the latest information on home values from the Federal Housing Finance Agency (FHFA).  The FHFA “Purchase-Only Index” for Arkansas shows home prices up 1.6% in the third quarter, and up 7.1% from a year earlier.  For the nation as a whole, home prices were up 2.0% in the third quarter — 3.3% higher than the previous year.  As information accumulates, it is becoming increasingly apparent that home prices have bottomed out and are are now showing at least modest rates of appreciation. 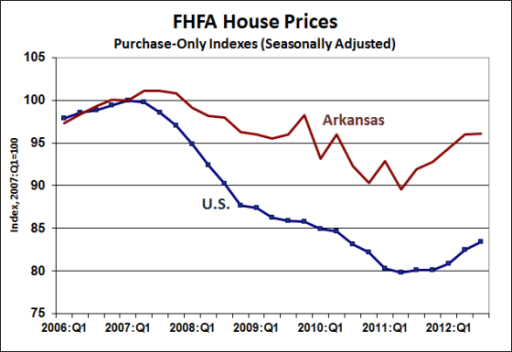 The FHFA home price indexes are constructed using sales price information from all mortgages processed by FannieMae and FreddieMac.  In order to expand the coverage to include other mortgages, the FHFA has recently introduced an “Expanded Index” that also includes information from county recorder offices.  The latest information from this data series also shows a turnaround in home prices.  In the third quarter, the expanded index data shows prices up 1.2% in Arkansas and up 1.0% for the U.S.  Compared to the third quarter of 2011, prices were up 5.4% in Arkansas and 3.4% nationwide. 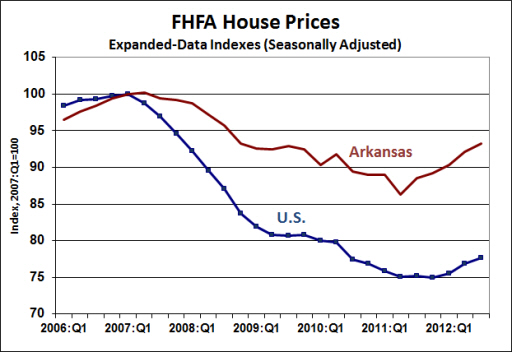 In order to accumulate enough sales-price data to provide reliable indicators for metro-area home prices, the FHFA also constructs a set of “All Transactions” indexes that include information from actual home sales as well as appraisals associated with refinancing.  Recent data for this set of statistics show smaller home price increases — perhaps because appraisers have recently been providing relatively conservative estimates of home values.  Nevertheless, the overall pattern is similar, with prices appearing to have reached a trough, if not yet a clear upturn. 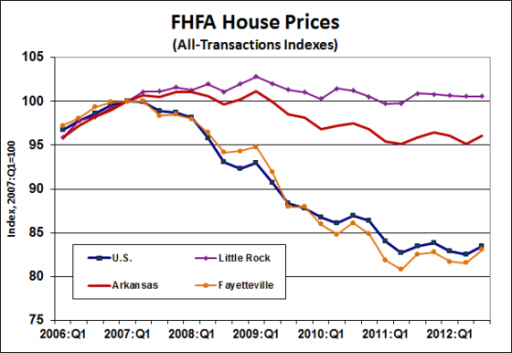 The all-transactions data shown above also includes price data for the state’s largest metro areas, Little Rock and Fayetteville.  The distinctiveness of local market conditions is evident in this comparison.  Prices in Northwest Arkansas have followed a pattern similar to the national average, while those in Little Rock have shown relatively small changes over time.  As shown in the table below, home prices in the state’s other metro areas have shown differing patterns.  In the third quarter, the all-transactions indexes rose in all metro areas except Little Rock (which was essentially unchanged).  Compared to a year earlier, prices are higher in five metro areas, and are down only for Hot Springs, Little Rock, and Memphis. 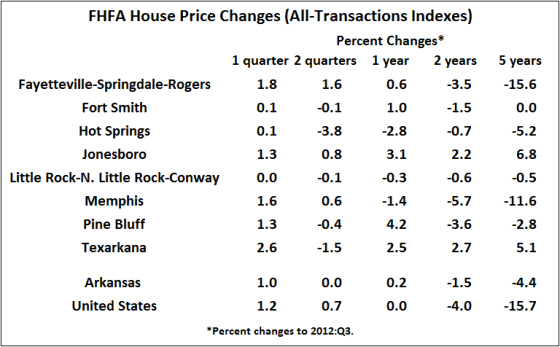