New data from the Bureau of Labor Statistics shows that October unemployment rates were down from a year ago in 329 of the nation’s 372 metropolitan areas.  All of Arkansas’ metro areas are included in this total.  As shown in the table below, year-over-year changes in unemployment rates (not seasonally adjusted) ranged from -0.3% in Jonesboro to -1.3% in Texarkana. 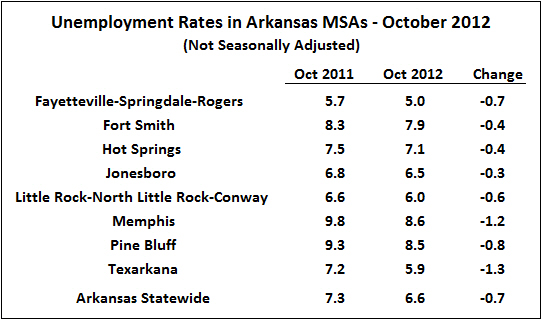 Monthly changes in smoothed seasonally adjusted estimates for October were mixed.   Unemployment rates were unchanged in Fayetteville, Hot Springs, and Little Rock.  Rates ticked up by one tenth of a percent in Fort Smith, Jonesboro, and Memphis.  Pine Bluff’s unemployment rate rose by 0.2% and Texarkana’s declined by 0.2%.  Four of the eight metro areas had unemployment rates lower than the statewide average of 7.2%. 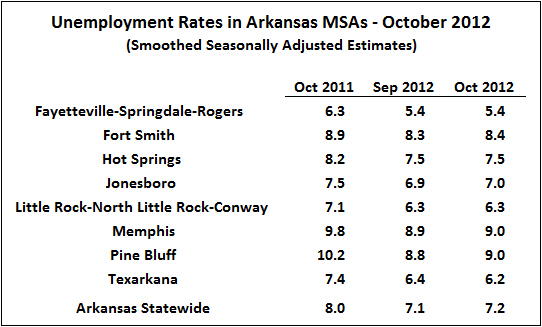 Payroll Data
Nonfarm payroll employment in October was unchanged in Fort Smith, Hot Springs and Memphis.  The state’s other metro areas saw fairly sizable increases.  Employment was up 1.0% in Fayetteville and Texarkana, up 1.2% in Little Rock, up 1.4% in Pine Bluff and up 0.8% in Jonesboro.  Each of these increases exceeded the statewide growth rate for the month (0.4%).   Employment was higher than a year earlier in most of the state’s metro areas, with the exceptions of Fort Smith and Hot Springs. 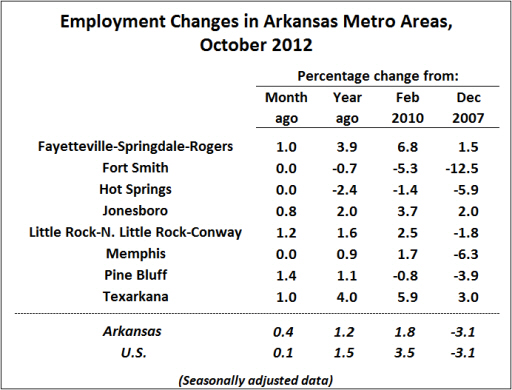