New data from the Bureau of Labor Statistics and Department of Workforce Services show the Arkansas unemployment rate fell two-tenths of a percent to 7.0% in November.  The number of unemployed fell by 2,359 to 95,935.  Both the unemployment rate and the number of unemployed were at their lowest levels since January of 2009.  However, household survey also showed that the number of employed persons dropped by 6,305.  Consequently, the labor force contracted by 8,664.  November’s decline represents the sixth consecutive monthly decline in the labor force, and this drop accounts for at least some of the fall in the unemployment rate. 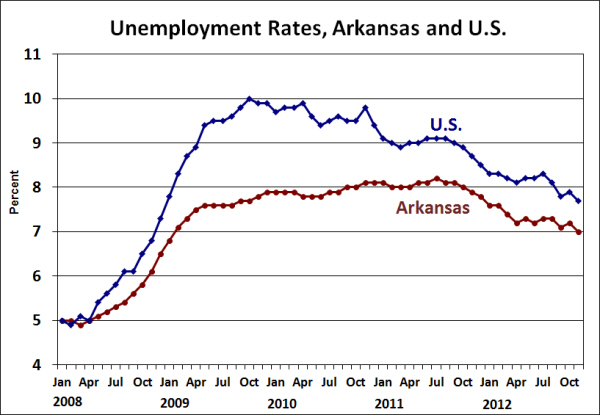 Payroll Employment
Seasonal factors become particularly relevant this time of year, as colder weather and holiday shopping affect employment patterns in a number of sectors.  The not-seasonally-adjusted statistics for payroll employment showed a decline of 1,100 jobs in November, while the seasonally adjusted statistics showed an increase of 2,000.  For example, construction is one sector where seasonal considerations play an obvious role:  without any seasonal adjustment, the number of construction jobs declined by 1,500.  But the seasonally adjusted figures showed a a slight increase.  Other sectors that experienced largely seasonal declines in November included  Leisure & Hospitality and Professional & Business Services.   On the other hand, employment in the Retail Trade sector was up by 4,000 for the month (not seasonally adjusted), but much of that increase was a typical seasonal phenomenon (seasonally adjusted retail employment was up only 800).   Seasonal movements in employment are certainly of interest in their own right, but seasonally-adjusted figures facilitate comparisons aver time that are better-suited to evaluate business cycle conditions — in this case, progress toward recovering jobs that were lost in the 2008-09 recession.

The table below shows seasonally-adjusted changes in employment over the past month and the past year, as well as comparisons with the previous employment peak (Dec 2007) and trough (Feb 2010).  Month-to-month changes were positive in the good-producing sectors, but were down in many of the service-providing sectors.  Compared to November of the previous year, employment was up in most sectors, but lower in Information, Financial, and Professional & Business services.  Construction employment was also down sharply from the previous year.  Overall, the most recent published data show that employment has increased by 22,100 since the trough of February 2010, but is still down 35,700 from the start of the recession. 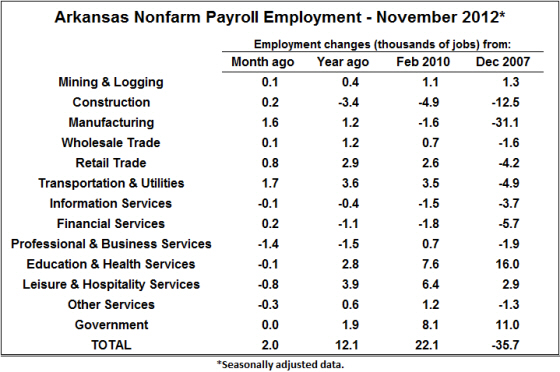 As discussed in recent posts (here, for example) the payroll data for 2011 and early 2012 are expected to be revised upward significantly when the benchmark revisions are released next March.  The expected revisions raise the path of payroll employment significantly — particularly in the fourth quarter of 2011.  For the third and fourth quarters of 2012, the revisions are expected to increase measured employment  by over 13,000 jobs.  As shown in the table below, these revisions paint a much rosier picture of progress toward recovery from the 2008-09 recession.  After the expected revisions, November’s employment figures show a recovery of nearly 36,000 jobs since February of 2010, and a shortfall of only 22,000 jobs compared to the month immediately preceding the recession. 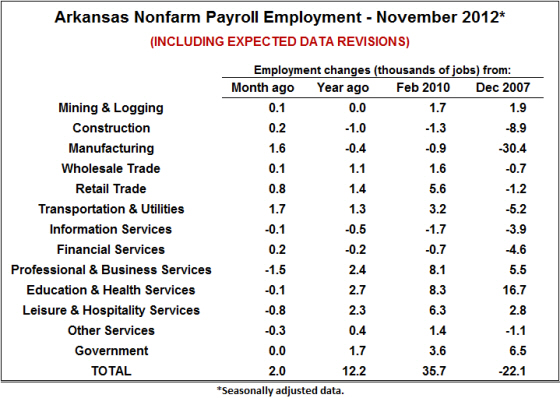