New data on employment and unemployment in Arkansas’ metro areas generally show improvements in labor market conditions around the state.  This morning’s data release from the Bureau of Labor Statisics showed that unemployment rates in November were lower than a year ago in all eight of the metro areas that include parts of Arkansas.  The year-over-year declines range from -0.3 percentage points in Jonesboro to -1.4 percentage points in Memphis. 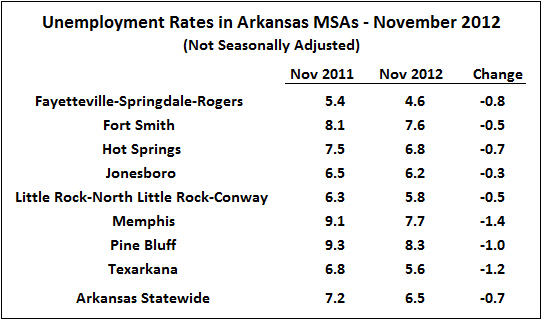 The not-seasonally-adjusted unemployment rates were down from the previous month in all metro areas — quite sharply in some cases.  However, recurring seasonal patterns drove a large proportion of the changes.  Even after seasonal adjustment, however, unemployment rates were down for the month in most of Arkansas metro areas.  Data from the BLS smoothed seasonally adjusted estimates showed particularly sharp declines in unemployment for Memphis (-0.4%) and Texarkana (-0.3%).  The seasonally adjusted estimates showed that rates were unchanged in Jonesboro, Little Rock, and Pine Bluff. 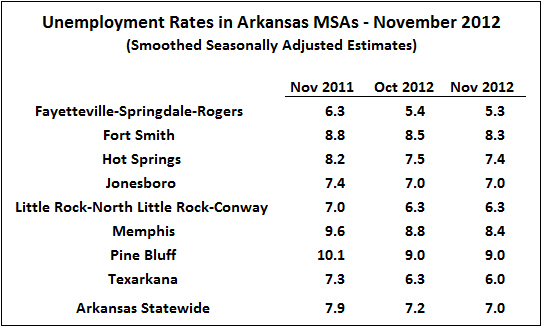 The chart below shows the path of seasonally-adjusted unemployment rates over the past three years.  Although some metro areas have seen temporary increases from month to month, the trend of lower rates has clearly prevailed since the latter part of 2011. 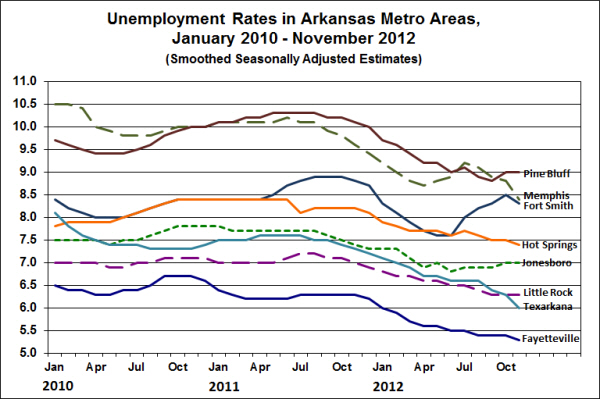 Payroll Data
Data from the survey of employers told a similarly upbeat story.  From October to November, employment increased in all metro areas except Little Rock. Monthly increases exceeded a full percentage point in Hot Springs, Jonesboro, and Pine Bluff. Compared to the previous November, employment was higher in Fayetteville, Jonesboro, Little Rock, Pine Bluff and Texarkana. Only Fort Smith, Hot Springs, and Memphis showed lower level of employment than a year earlier. The currently-published data show that all of Arkansas’ metro areas except Fort Smith have shown positive growth since the statewide employment trough-date of February 2010.  But only Fayetteville, Jonesboro and Texarkana show employment above pre-recession levels. 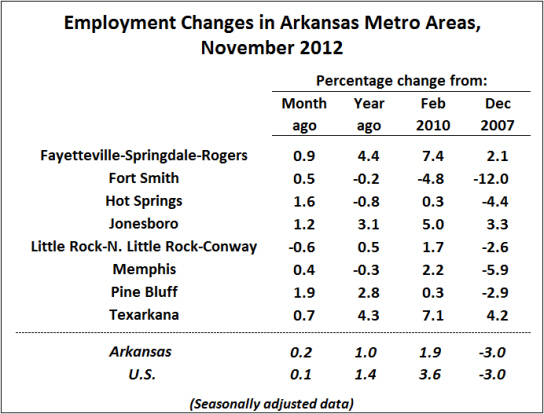 Expected Data Revisions
The employment data in the table above summarizes currently-published data.  When the payroll data are revised and benchmarked against more reliable data, however, the situation is likely to look quite different.  In previous posts (here for example), we have reported that recent employment data for the state of Arkansas is likely to be revised up by over 13,500 jobs (about 1.2%).  The data revisions for metropolitan areas are subject to greater uncertainty, but the underlying data from the Quarterly Census of Employment and Wages suggest that some of the metro employment figures will be revised substantially.   As shown in the set of charts below, revisions will be particularly significant for Fort Smith, Jonesboro, and Texarkana.  In percentage terms, the largest revision (and arguably the most welcome) is expected to affect data for Fort Smith.  The new data will show that the currently published figures underestimate actual employment in Fort Smith by approximately 5,700 jobs, or 5.2%. 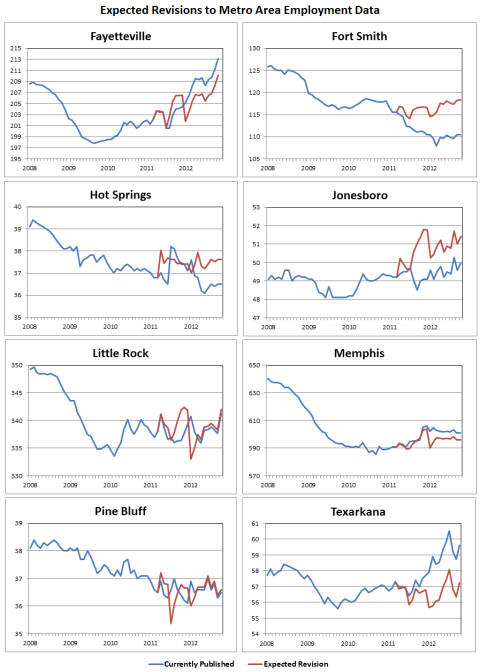 With these expected revisions, the November employment situation looks somewhat different.  The most recent change (from October to November) will not be affected.  However, the year-over-year, change-since-trough and change-since-peak comparisons will be affected.  The table below summarizes the revised situation (compare to the table above of the same title). 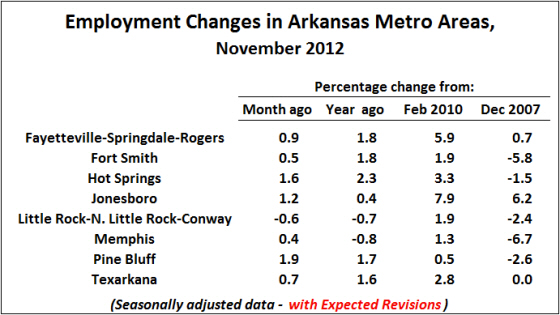 Note that these are preliminary estimates calculated by the Institute for Economic Advancement.  The official benchmark revisions will not be published until March 2013.