Total personal income in Arkansas rose by 1.0% in the third quarter, with a particularly sharp increase in farm income.  According to today’s news release from the Bureau of Economic Analysis (BEA), Arkansas’ third-quarter growth rate was the second-highest in the nation (North Dakota had the highest growth rate).  Data for the first two quarters of the year were also revised upward — from 0.8% to 1.0% in the first quarter and from 1.2% to 1.4% in the second quarter.  Compared to the third quarter of 2011, personal income in Arkansas is up 3.8%.  For the total United States, income growth was 0.4% in the third quarter, and has totaled only 2.4% over the past four quarters. 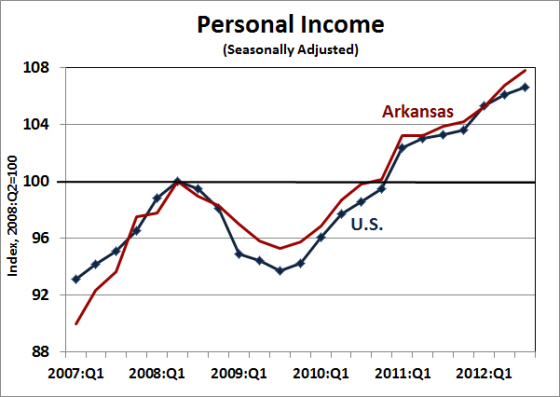 Inflation (as measured by the price index for Personal Consumption Expenditures) rose at a rate of 0.4% in the third quarter, up from a 0.2% pace in the second quarter.  Consequently, real personal income in Arkansas rose by only 0.6% in the third quarter, and was up just 2.2% over the past year.  After this inflation-adjustment, Arkansas personal income is now slightly above its previous cyclical peak (by about 1.4%). 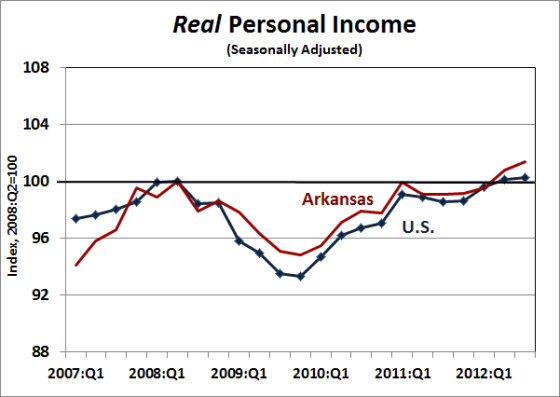 Arkansas was one of several agricultural states for which farm income figured prominently.  For the third quarter alone, farm income was up 19.6%, and accounted for approximately one-third of the state’s income growth.  The BEA report cited two special circumstances affecting agricultural income in the third quarter — both associated with the summer’s drought conditions.  One key factor was net insurance settlements — particularly in the states of the upper Midwest where crop damage from the drought was the most extensive.  In the south, third quarter farm income was also affected by a relatively early harvest season.  (The BEA cited Texas, in particular.)  As noted in previous posts, Arkansas farm output was not as severely affected by the drought due to the high proportion of irrigated farmland in the state, but weather conditions were such that crops were both planted and harvested earlier than usual.

Other than agriculture, earnings growth by industry in Arkansas generally mirrored the national averages.  Sectors with strong earnings growth included durable goods manufacturing, professional services, and health care & social assistance.  Transportation and warehousing fared well in Arkansas, but contributed little to the nation’s income growth.  On the other hand, earnings in the construction industry were weaker in Arkansas than for the nation as a whole (although the BEA report noted that construction income was particularly concentrated in Texas and Oklahoma). 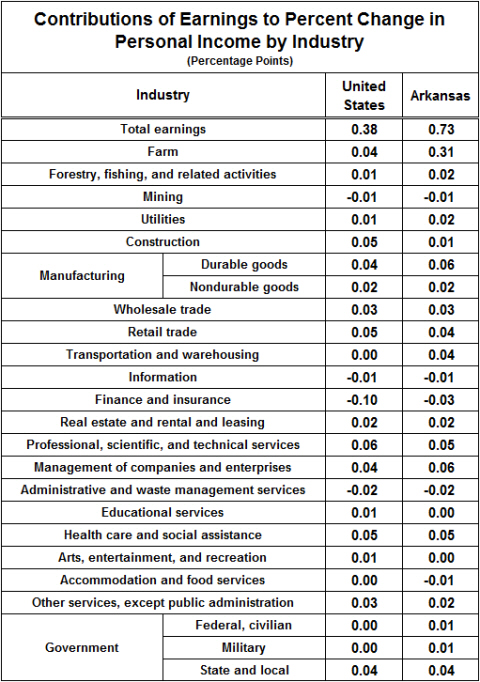