The unemployment rate ticked down to 5.7% in June from a revised 5.8% in May.  The rate has been hovering in range of 5.6% to 5.8% since last fall.  The unemployment rate had come down rapidly during 2013 and 2014, but it is not surprising that its descent has slowed as we get closer to full-employment. 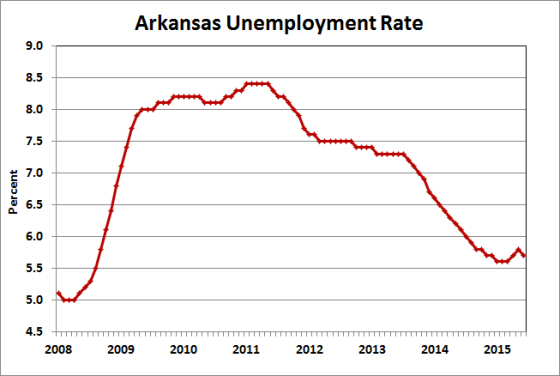 The underlying components of the unemployment rate, derived from a household survey, showed slightly improving conditions.  In particular, the number of unemployed Arkansans was down slightly in June, following three consecutive monthly increases.  The number of employed was up for a 20th consecutive month, and has increased by over 45,000 over the past 12 months.  As a result, the labor force continued to expand in June.  Since April 2014, the Arkansas labor force has expanded by nearly 44,000, offsetting about 60% of the decline that we saw from November 2011 through April 2014. 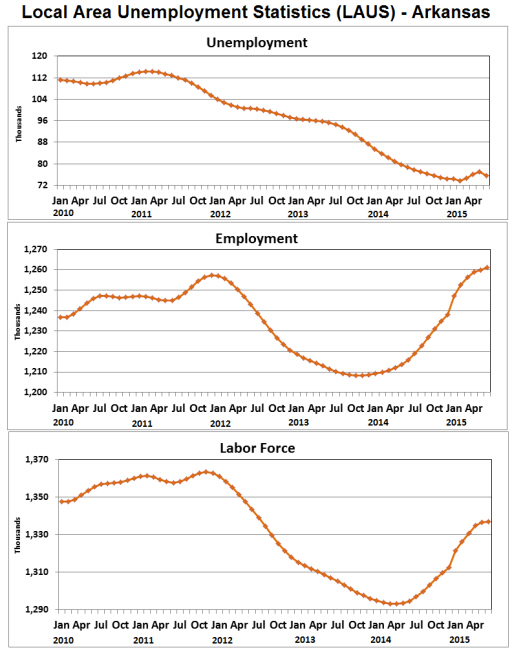 Payroll Employment
As is always the case in June, the monthly figures on payroll employment were influenced by predictable seasonal factors.  In particular, the not-seasonally adjusted data showed sharp declines in Education Services and Government, both reflecting summer break at educational institutions.  Seasonally adjusted data for these sectors were flat, however, reflecting the fact that the May to June change was typical.  Overall, the not seasonally adjusted figures showed a decline of 3,100 jobs, but after seasonal adjustment total nonfarm payroll employment was up by 1,800.

A rather sharp increase in Construction employment in June (+1,700, seasonally adjusted) was welcome news.  Employment growth in that sector had sagged earlier in the year, but recent growth suggests that the earlier setbacks were, in fact, largely related to poor weather conditions.  The only significant weakness in the monthly employment figures was in Leisure and Hospitality services. 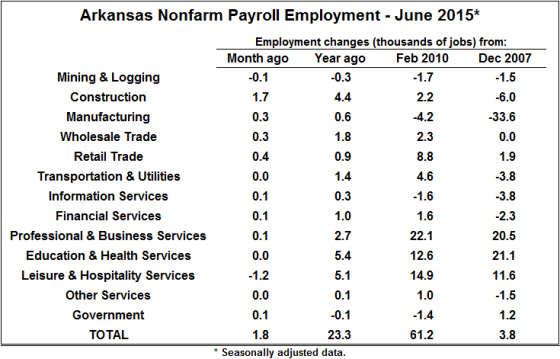