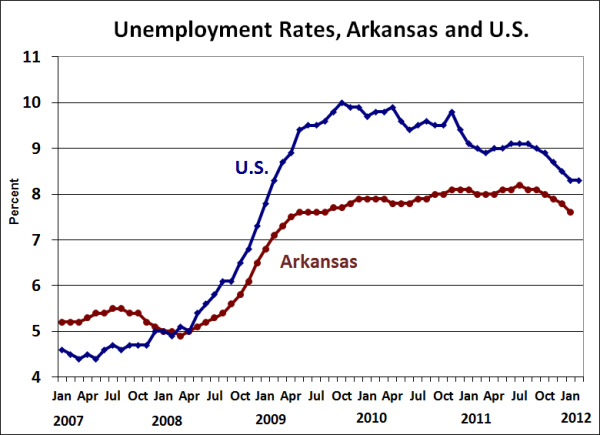 The independent payroll survey showed modest job gains for the month, with increases spread across several sectors.  Although the not-seasonally-adjusted data showed a net decline for the month, the job losses were largely seasonal as holiday-related employment declined (particularly in the Retail Trade and Leisure & Hospitality sectors).  Seasonally adjusted data showed an increase of 4600 jobs for the month. Goods producing sectors saw an increase of 2300 jobs, with most of the gains in construction. Service providing sectors showing gains included Trade, Transportation & Utilities (+2200), Education & Health (+1700), and Leisure & Hospitality (+1700).  These increases were partly offset by notable job-losses in Professional & Business Services (-1100) and Government (-2100). 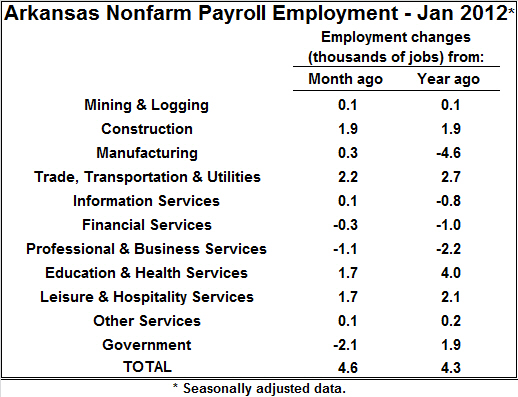 Compared to a year ago, the newly-revised payroll data show a net increase of 4300 jobs.  Education & Health Services continued to be the strongest-performing sector over the past 12 months, adding 4000 jobs.  In contrast, manufacturing employment has fallen by 4600 jobs.

This monthly report on payroll employment included the annual benchmark revisions to the data.  As previously reported, we were anticipating a sharp downward revision to the jobs data for early 2011.  As of the new benchmark date (2011:Q1) we expected to see a downward revision of approximately 11,000 jobs.  The actual revision was down 10,400.  Estimation of new seasonal factors and updated source-data also resulted in a downward revision to the third-quarter statistics.  At the end of 2011 (December) total payroll employment is now estimated to have been 1161.3 thousand, down 14.3 thousand from the previously-estimated 1175.6 thousand.  The revised data now show that 2011 was a year of negative net employment growth.  From December 2010 through December 2011, total payroll employment in Arkansas fell by about 3,100 jobs. 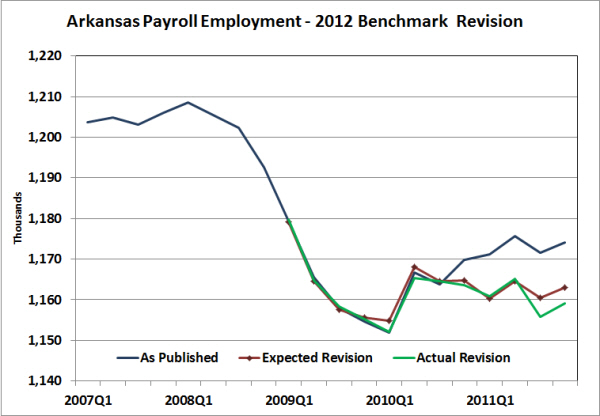