Next week we’ll see the results of the long-awaited benchmark revisions to payroll employment data for Arkansas.  In the meantime, the Bureau of Labor Statistics (BLS) has completed its annual revision of the Local Area Unemployment Statistics (LAUS).  Data for the LAUS are based on the same concepts and definitions as the national unemployment rate figures, but are calculated using statistical models that incorporate information from a number of sources.  Each year, the BLS revises labor force and unemployment data to incorporate updated population data, other data revisions, and reestimation of statistical models.

The revised figures for Arkansas’ unemployment rate show a slightly different pattern than did the previously-published data.  As shown in the figure below, the revised data show that the unemployment rate was higher than previously published from mid-2010 through mid-2011.  On the other hand, the unemployment-rate surge that we saw in the latter part of 2011 has been largely revised away.  For the month of December 2011, the new data show the rate at 7.8% — slightly higher than the 7.7% that was previously reported. 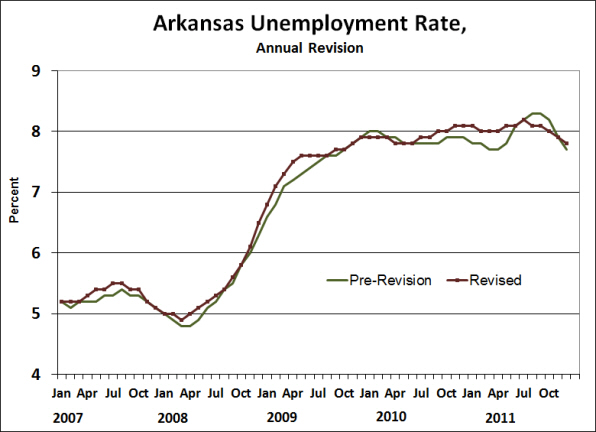 During 2011, the BLS began publishing smoothed seasonally-adjusted metropolitan area estimates for labor force and unemployment data.  The smoothed seasonally adjusted (SSA) estimates are processed using an algorithm that incorporates a long-run trend smoothing procedure.  Hence, the estimates show less month-to-month variability than data that is subjected to more conventional seasonal-adjustment techniques.  Beginning with the next Metropolitan Area Employment and Unemployment news release, the Arkansas Economist will begin publishing these estimates instead of the figures calculated in-house by the Institute for Economic Advancement.

Comparing the chart below to the most recent analysis of metro area unemployment rates, the overall pattern of unemployment-rate movements is basically the same but with somewhat lower volatility.  Because the smoothing procedure reduces the magnitude of month-to-month changes, the SSA data ended the year showing higher unemployment-rate levels than a simple seasonal adjustment technique. (That is, some of the rapid decline in unemployment rates that occurred in the last three months of the year is treated as transitory by the smoothing algorithm.)  The SSA data make for less dramatic headlines — rather, they provide a more measured evaluation of changes in metro area unemployment rates over time. 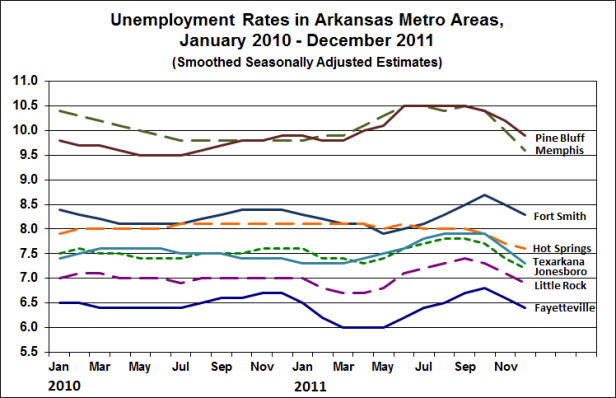