Yesterday’s employment report included the annual benchmark revisions to the payroll employment data.  Each year, the numbers in the Current Employment Statistics (CES) data set are updated to reflect more accurate figures from the Quarterly Census of Employment and Wages (QCEW).  This year’s revision “benchmarked” the CES data to levels consistent with the QCEW as of 2011:Q1.  In addition, data from the QCEW itself were revised for the period covering last year’s benchmarking.  Hence, the revision process affects employment growth estimates for both 2010 and 2011.  (New seasonal factors are also estimated for the period 1990-present, but revisions from this source are generally small.)

The table below shows employment growth by sector for 2010 and 2011 (seasonally adjusted data).  The first two columns report the data as previously published (as of January 2012).  The second two columns show the revised data that came out yesterday.  The first line shows that total employment growth in Arkansas was revised downward in both years.  Employment growth in 2010 was marked down from 12,600 to 8,600 jobs.  The revision for 2011 was even more substantial:  The previously-published data showed an increase of 8,000 jobs for the year, whereas the revised data show a loss of 3,100 jobs. 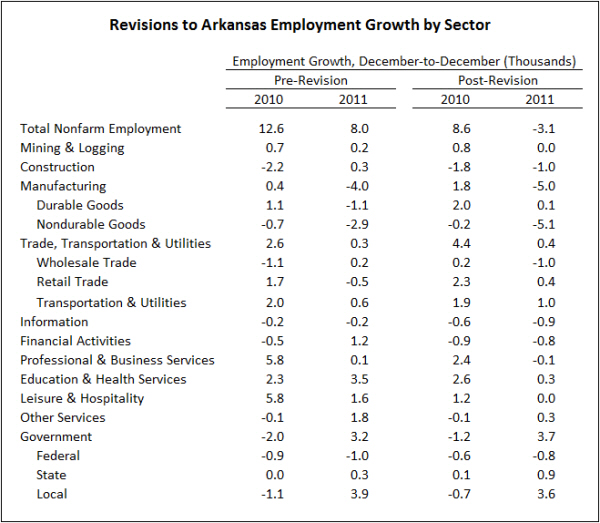 The substantial mark-down in employment growth for 2011 was not attributable to any one sector.  Several sectors were subject to sharp downward revision, including Contruction, Manufacturing (particularly Non-durable Goods), Wholesale Trade, Financial Activities, Education & Health Services, and Leisure & Hospitality.  A few sectors added more jobs than we had previously thought:    Retail Trade and Durable Goods Manufacturing are two examples.

The next table shows the revisions to employment growth in the state’s Metropolitan Statistical Areas (MSAs).  The most substantial revision was for Fort Smith.  Previously-published data had shown that Fort Smith lost 1,700 jobs in 2011.  The revised data show job losses totalling 7,700.  Data for Hot Springs were also subject to a substantial revision:  Job growth of 1,500 was marked down to zero for 2011, and a small gain in the previous year was revised to show a net job loss.    In contrast, data for Jonesboro were revised upward for both years.

Of course, even the revised data are subject to further revision.  This time next year we’ll see yet another version of the job-growth statistics for 2011.