The April employment report for Arkansas represented another in a string of positive reports in 2016, particularly for the data from the household survey.  The unemployment rate declined by two-tenths of a percentage point, from 4.1% in March (revised) to 3.9%. The monthly gain in employment was 5,309 — down from the ebullient 10,000+ pace of the previous three months but still substantial.  The number of unemployed Arkansans declined by 2,449. 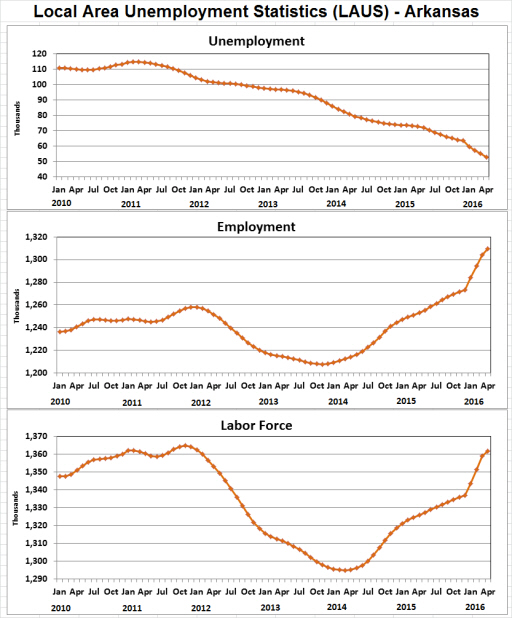 The sharp decline in the unemployment rate and the underlying surge in household employment are almost too good to be true.  In just four months, the household survey data have shown a cumulative employment increase of over 35,000 and a drop in the unemployment rate of 0.8%.  In contrast, data from the payroll survey have shown a decline of 1,900 jobs over the same period.  Eventually, data revisions might help reconcile these conflicting signals.  But for now, it’s probably a good idea to take the household employment report with a grain of salt.

Payroll Survey
Nonfarm payroll employment increased by a mere 700 jobs from March to April.  Compared to April of 2015, payrolls were up by over 25,000, but most of that growth took place during the latter part of 2015.  Employment is now 17,500 jobs (1.4%) higher than it was before the onset of the “great recession.” 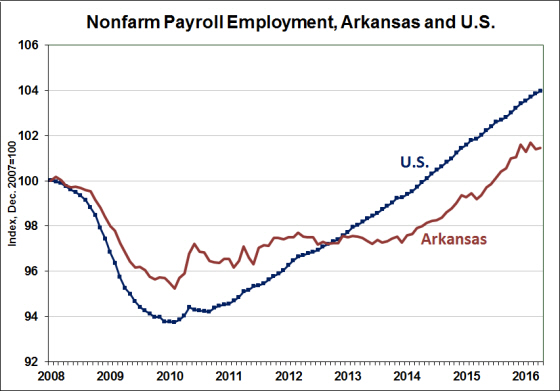 Sectoral changes in payroll employment were mixed.  Gains were recorded in the goods-producing sectors of Construction and Manufacturing.  Wholesale and Retail Trade sectors also experienced growth, as did Professional and Business Services.  Other service-providing sectors were flat or declining.  The not-seasonally adjusted data showed an increase in Leisure and Hospitality services; however, after taking account of normal seasonal variation, employment in that sector down from the previous month. 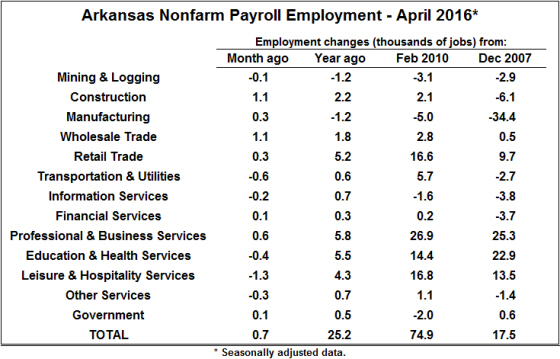