The Arkansas Realtors® Association announced yesterday that April home sales were up 13.6% compared to the previous year.  The fact that home sales are increasing is certainly good news, but the year-over-year comparison probably overstates the magnitude of the improvement.

As shown in the figure below, home sales in April 2012 were unusually low:  Sales typically follow a rising trajectory for the first half of the year but experienced an down-tick in April of last year.  This kind of month-to-month variability is not surprising.  The sales statistics are based on the closing date of sales transactions.  It is often the case that a flurry of closings will take place at the beginning or end of a month, spilling over from one month to the next.  Monthly sales totals reflect this volatility, recommending the use of averages or totals over longer periods of time.  For example, yesterday’s report noted that year-to-date home sales were up 7.9% in April — not as impressive as the 13.6% headline, but a more realistic assessment of improvement in the residential real estate market thus far 2013. 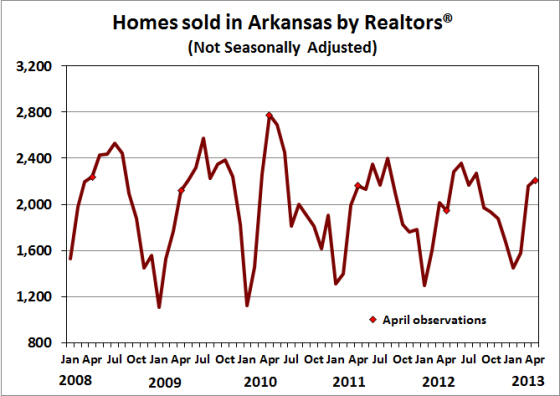 The second figure, below, illustrates the trend in home sales after removing the prominent recurring seasonal patterns.  After seasonal adjustment, the month-to-month volatility is more noticeable, but so is the generally increasing trend in 2013.  A better illustration of the trend will be available when we have figures for the entire second quarter of the year.  With that data in hand, we will be able to assess the data after seasonal adjustment and quarterly averaging. 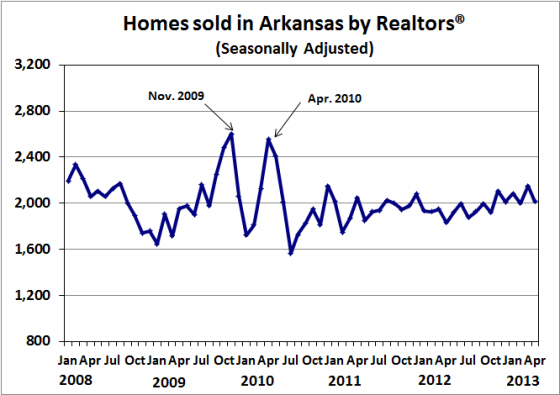