Figures for personal income growth in the 50 States and District of Columbia were released this morning.  In Arkansas, personal income was essentially unchanged from the previous quarter.  The press release from the Bureau of Economic Analysis was generally upbeat, noting that the report showed “19 states seeing net earnings growth for the first time in at least a year.”  With income growth improving in many States, the zero-growth measured for Arkansas placed our state in the lowest quintile with a rank of #42. 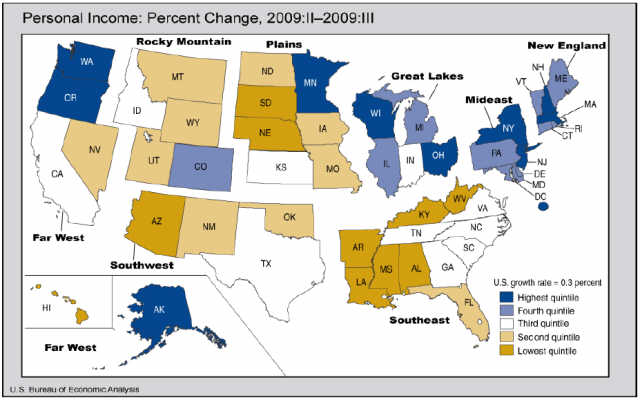 Today’s report is a very good example of why it is important to look beyond a single data observation.  For many states in the nation, even modest income growth represents a vast improvement over recent quarters.  However, Arkansas suffered a more modest slowing of income during the recession.  Personal income during the first two quarters of the year declined by less than one-tenth of one percent in Arkansas.  Income declines in other parts of the country were far greater, with a national average of -1.5%.

The report released today shows that Arkansas personal income in the third quarter was only 0.09% lower than in the fourth quarter of 2008.  From this longer term perspective (cumulative growth during 2009), Arkansas is in the highest quintile among the states, with a rank of #8.

Arkansas may not be showing the gains that are being recorded in other states, but we didn’t suffer as severe a downturn either.   It’s good news that other parts of the country are showing signs of recovery – this can only help businesses in Arkansas as demand for our goods and services picks up in other parts of the nation .