Earlier this week (on Sept. 1), the U.S. Bureau of Labor Statistics (BLS) announced the release of its latest estimates of unemployment rates for metropolitan statistical areas (MSAs) around the country. The data for Arkansas MSAs showed that unemployment rates remained lower than the national average, but were well above their levels of a year earlier. The data released by the BLS also showed that unemployment rose from June to July in every metro area of the state except Fort Smith.
The latter observation might be misleading. While the national and state-level data are released on a seasonally adjusted basis, the BLS does not seasonally adjust the data for MSAs.  But it is important to recognize seasonal patterns. Most economic data series follow a distinct seasonal pattern. Economists call this pattern “the seasonal cycle.” Unlike the business cycle—which is irregular and often unpredictable—the seasonal cycle is recurring and predictable.
In the case of the unemployment rate there are some obvious reasons for a seasonal pattern: The unemployment rate tends to fall near the end of the year as temporary workers are hired to take on the extra demand of holiday shopping. It tends to rise sharply in January and then recover during the spring. When students enter the employment market in search of summer jobs, the unemployment rate rises again.  Typically, July represents the high point of the summer.
So when one asks the question, “Why did unemployment rise in July?” the answer might very well be: “Because it was July.” That doesn’t help explain the more pressing question, “Where do we stand in this irregular and unpredictable business cycle?”
Seasonally adjusted data can help to illuminate the answer to that question. Research on the development of seasonal adjustment techniques has been formidable, but the application of state-of-the-art methods is not rocket science: most statistical software packages that are designed for economic analysis include seasonal-adjustment as a standard procedure.
So I took it upon myself to seasonally-adjust the unemployment rate data for Arkansas’ MSAs (using data from January 1999 through July 2009). Some statistics from that exercise are reported in the table below. 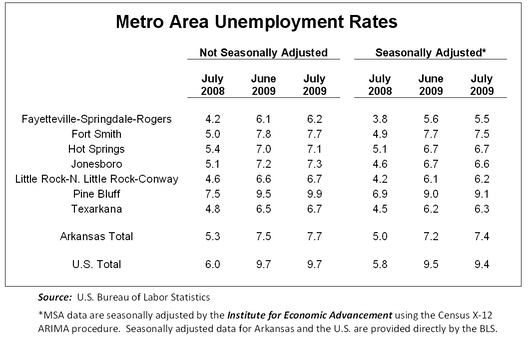