The latest payroll employment data for Arkansas (July 2009) indicate that the severe job losses we witnessed in late 2008 and early 2009 have subsided.  From October 2008 through March 2009, Arkansas suffered a net decline of more than 26 thousand jobs.  From March through July, the net loss has totaled only about 400 jobs.

Job losses are never good news, but the fact that we are no longer seeing the steep declines that we did during the most severe phase of the recession suggests that the worst might be over.  Employment tends to be a lagging indicator, so when we see job growth moving in a positive direction it will be a very good sign. 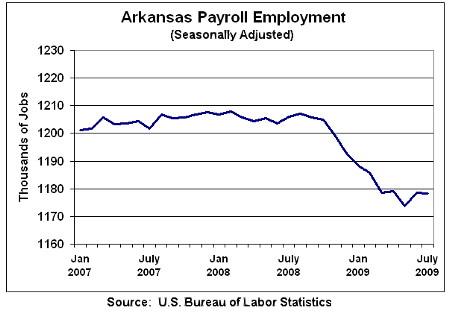