The BLS has released the annual revisions of state-level employment and unemployment estimates from the Local Area Unemployment Statistics (LAUS) program.  Although the revised unemployment rate data for Arkansas are only marginally affected, some of the underlying revisions to employment, population and labor force series suggest a significantly different story than the previously-published data.

By way of background:  Each year, LAUS data are revised “to reflect new population controls, updated inputs, re-estimation of models, and adjustment to new census division and national control totals.”  In 2022, the population controls include data from the 2020 Census, using a “blended base” that reflects new population totals but vintage demographic distributions.  The 2022 revisions also include some changes in the treatment of outliers, which have required special attention during the Covid-19 pandemic, but are no longer considered a real-time concern.

After all of these changes, the headline statistic for Arkansas, the unemployment rate, was subject to minor modifications. From an unrevised peak of 10.0% in April 2020, the revised data show a more or less steady decline in the rate through late 2021, with the rate leveling off at 3.3% by the end of the year.  The previously-published figure for December was 3.1%. 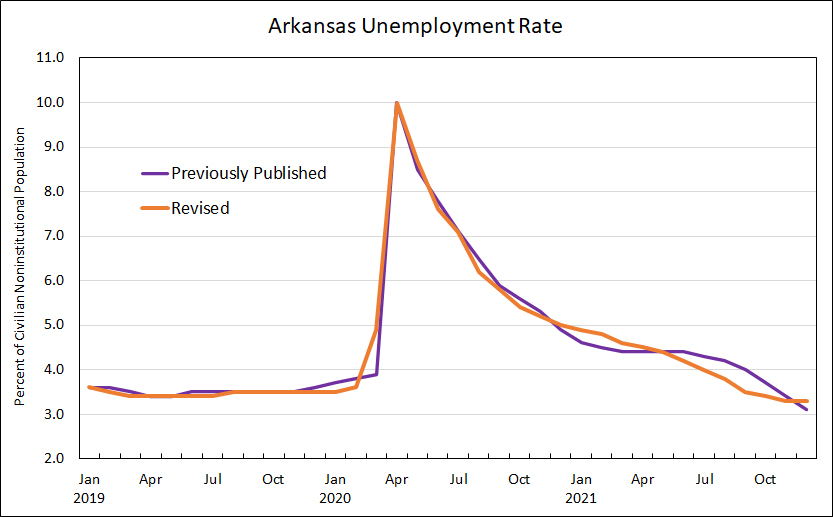 The modest changes to the unemployment rate series reflect the fact that there were only small changes to estimates of the number of unemployed.  But as shown in the figure below, the employment path and labor force totals were significantly revised. The inordinate increase in employment previously reported for December 2020 has now been completely eliminated, with the employment series showing steady, modest growth from April 2020 forward.  The labor force series (the sum of employed and unemployed) is also transformed by the revisions to employment. 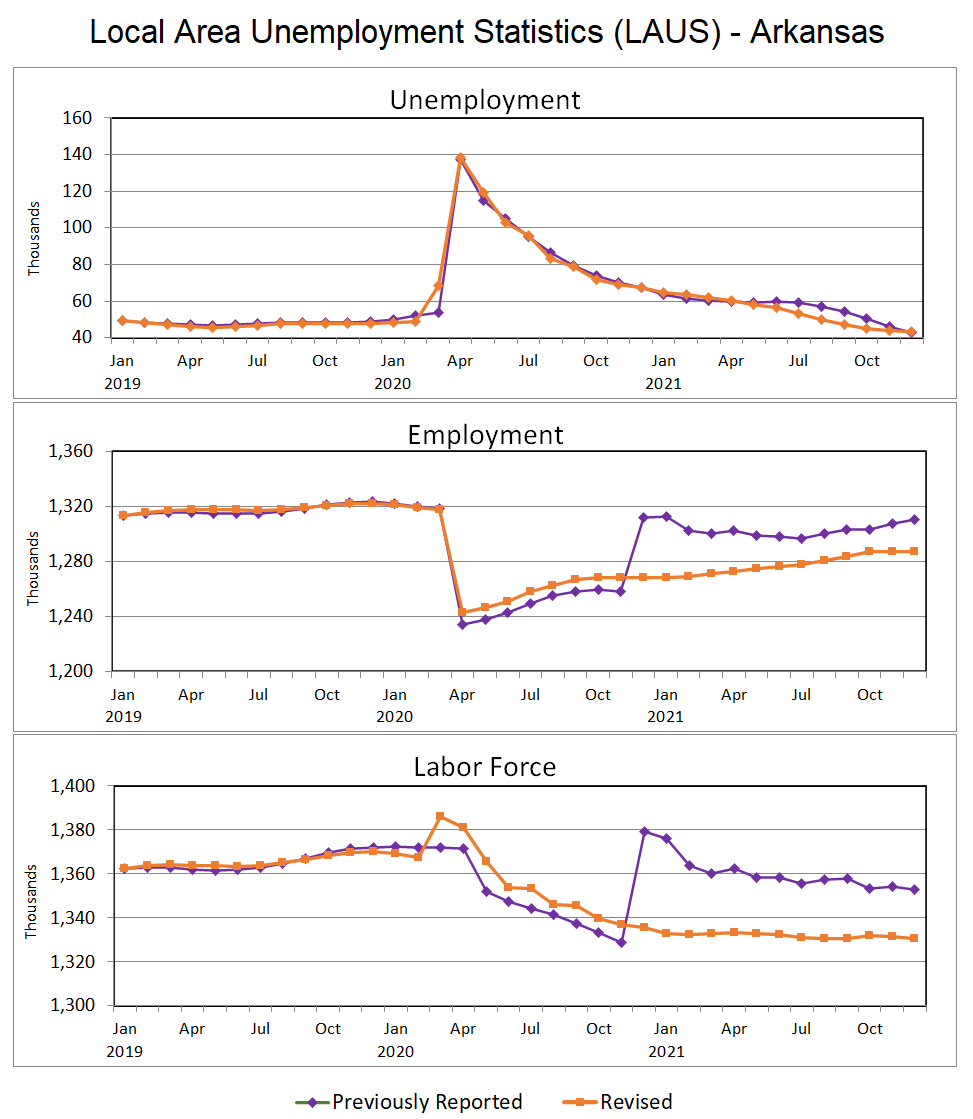 Although the revised series for employment and labor force new reflect a more gradual and steady pace of recovery from the pandemic-related downturn, the revised data suggest that cumulative progress toward recovery has been less than previously indicated.  The previously-published data showed that employment had returned to within 0.7% of pre-pandemic levels, while the revised data show that employment is still 2.4% lower than in February 2020.  A similar pattern shows through to the labor force series as well.

The implication of these revisions is important:  While the number of unemployed represent a smaller proportion of the labor force than every before, the size of the labor force itself has significantly contracted.  This is most directly observable by looking at the labor force participation rate—the proportion of the population that is employed or seeking employment.  The revised data show a slightly higher participation rate in the period preceding the 2020 downturn (due to a downward revision in population estimates), but the net decline since then is now estimated to be far larger that previous data suggested.  The previously-published data indicated a net decline of approximately 1.4% of the population, while the revised data show a decline of more than 2%. 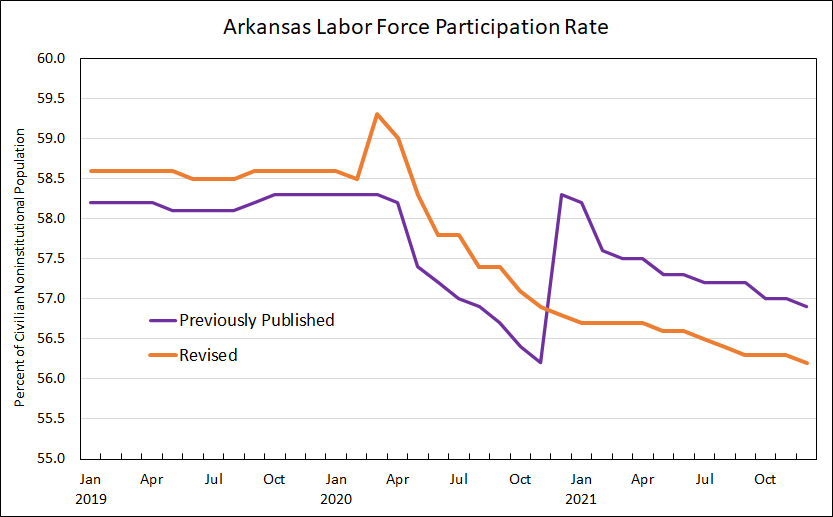 The significant decline in labor force participation demonstrates that the unemployment rate is only a partial indicator of labor market slack. Movements into and out of the labor force can have varying implications, depending on their cause and permanence, but to ignore those labor market flows would be to miss an important part of the story—particularly under the present circumstances.

The Employment-Population ratio is indicator that is often suggested as a preferable alternative to the unemployment rate for measuring employment relative to its potential.  As shown in the chart below, by this measure, Arkansas still has a long way to recover in order to reach an employment-population ratio near pre-pandemic levels—particularly in the revised data.  Starting from around 56.5% in late 2019 and early 2020, the employment population ratio has dropped to 54.4% by the end of 2021. 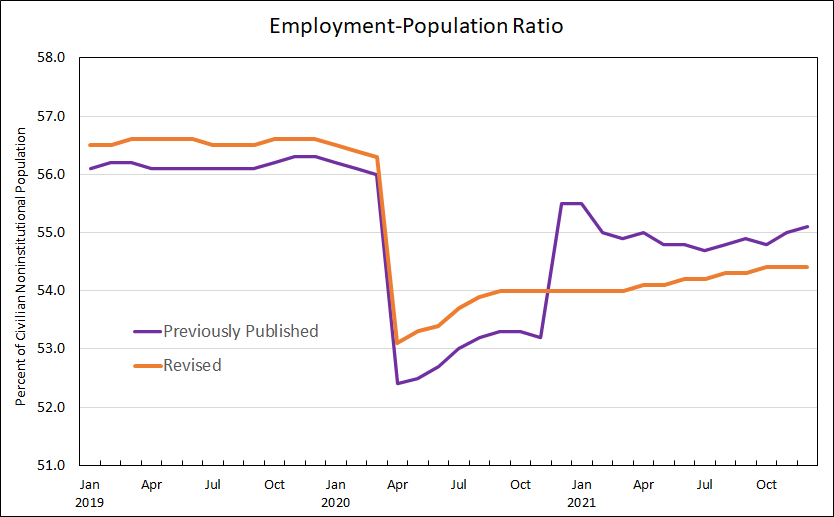 A key question about how these trends will play out in the future is the extent to which the decline in employment and the size of the labor force are permanent, or whether they reflect protracted, but transitory effects of the pandemic/recession.  Longer term demographic trends, e.g. the retirement of the “baby-boom” generation, has long been expected to lower participation rates and employment-population ratios over time.  Recent event may have hastened that process.  Nevertheless, we expect that some further recovery in those ratios will help support ongoing economic growth as the Arkansas economy continues to emerge from the downturn of 2020.