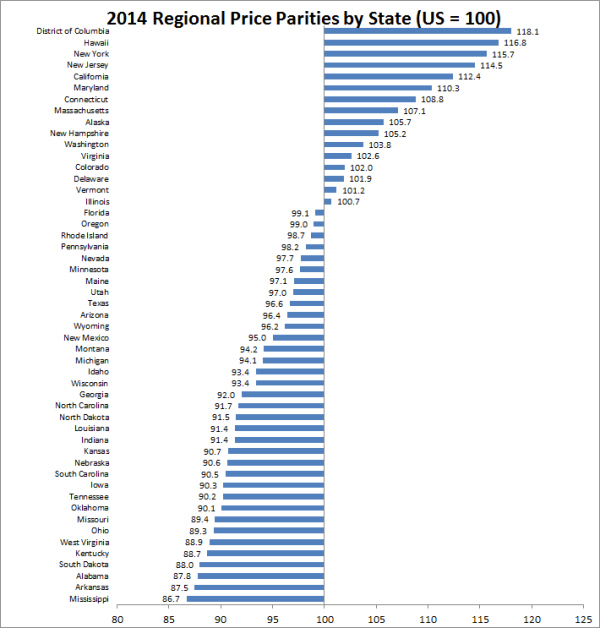 The slight down-tick in the RPP for Arkansas (from 87.7 in 2013 to 87.5 in 2014) can be interpreted as indicating a lower rate of inflation in Arkansas than the national average.  The U.S. inflation rate in 2014 (as measured by the Personal Consumption Expenditures Price Index) was 1.4%.  The implied regional price deflator for Arkansas increased by only 1.2%.  Hence, the state’s 3.7% growth rate of nominal personal income translates to a real (inflation-adjusted) growth rate of 2.5%.  For the U.S., the nominal growth rate of 4.4% implied a real growth rate of 2.9%.

The composition of Arkansas’ low RPP is typical of other low cost-of-living states:  Prices for goods are near the national average, but the prices of services — especially rents — are far below the norm.  This is not surprising, of course.  Goods can be transported and sold with little marginal expense.  Services are not so transportable.  In fact, in the jargon of international trade, services are often classified as “non-tradables.”  Statewide, the RPP for goods in Arkansas was 95.1%, implying that prices of goods were only 4.9% below the national average.  The RPP for non-rent services was 93.5, while the RPP for rents (which also proxy for home prices) was only 62.5.

As shown in the table below, there is considerable variation among RPPs in Arkansas metropolitan areas.  Overall RPPs range from 91.9 in Memphis to a low of 82.0 in Jonesboro.  The cost of living in Jonesboro–18% below the national average–is the fifth-lowest in the nation. 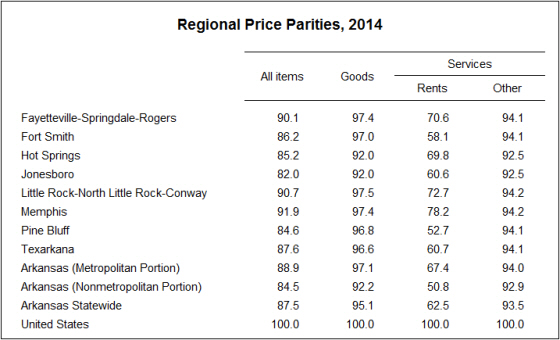 While there is variation in RPP price-levels around the state, all RPPs in Arkansas are below 100, implying below-average costs.  This also translates to higher purchasing power.  As shown in the table below, the Fayetteville-Springdale-Rogers metro area is the only part of the state where dollar-incomes are above the national average, with incomes in Pine Bluff at less than two-thirds of the norm.  After RPP adjustment, incomes in all parts of the state (other than Northwest Arkansas) are closer to the national average. 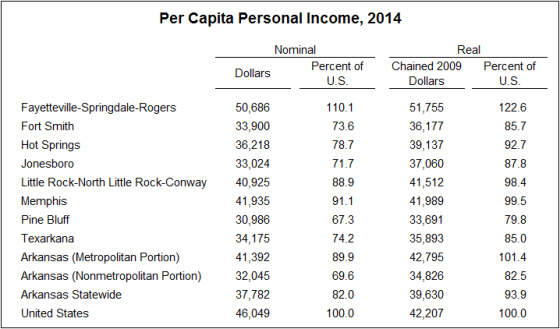 Changes in RPPs for different metro and nonmetro areas around the state also differ, implying variation in inflation rates.  In economic terms, it is the real inflation-adjusted growth rates of income that matters.  The table below shows both nominal and real income growth for the metro and nonmetro areas of Arkansas.  Note that the differences between total income growth and per capita income growth reflects changes in population.  Much of the total income growth in Northwest Arkansas represents population growth that has accompanied general economic expansion.  On the other hand, total real income growth in Pine Bluff was negative, but the losses in income reflected declining population.  In per capita terms, real income in Pine Bluff remained approximately unchanged from the previous year (+0.1%). 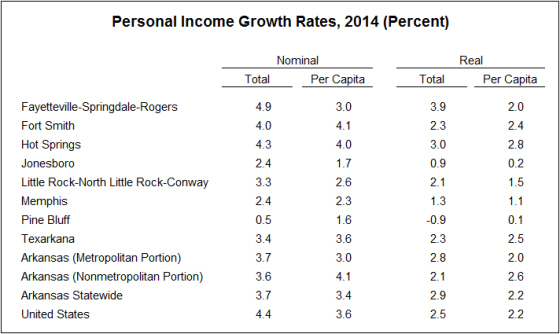