The Bureau of Economic Analysis has released yet another “prototype” data set for state-level statistics.  Earlier this month we saw, for the first time, estimates of personal consumption spending by state.  Yesterday, the BEA introduced state-level statistics on quarterly GDP.  For some time, we have had estimates of annual GDP for states, but annual averages can only reveal so much about the short-term ups and downs that characterize an economy.  Access to quarterly estimates provides additional detail for assessing the economy’s dynamics.

The chart below compares quarterly growth rates for U.S. GDP with the new quarterly measure of Arkansas GDP.*  The quarter-to-quarter changes for Arkansas show more volatility than the national average.  This is partly due to statistical measurement issues, but also due to the fact that the U.S. average is naturally smoother as increases in one region tend to offset decreases in others.  Overall, as with other measures of economic activity, Arkansas economy has followed a trajectory similar to the U.S. as a whole.  The data also corroborate some previously established patterns:  Arkansas experienced a sharp recovery from the recession in late 2009 and early 2010, but then fell into a pattern of relatively sluggish growth.   There were even two episodes — late 2010 and mid 2012, where Arkansas experienced two consecutive quarters of negative output growth.  The pace of the expansion picked up in 2013, particularly early in the year. 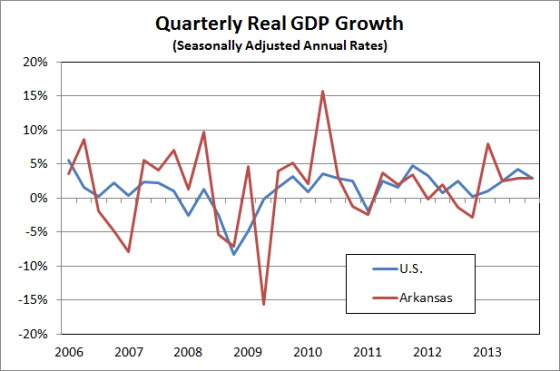 The most recent observations released as a part of the new prototype series were for the fourth quarter of 2013.  In Arkansas, fourth quarter GPD increased at a seasonally adjusted annual rate of 3.0% — slightly higher than the U.S. average of 2.8%.  Among the 50 states, Arkansas growth rate ranked #22.  As shown in the table below, growth was positive in most sectors.  Output in manufacturing — especially non-durable goods — showed particular strength. 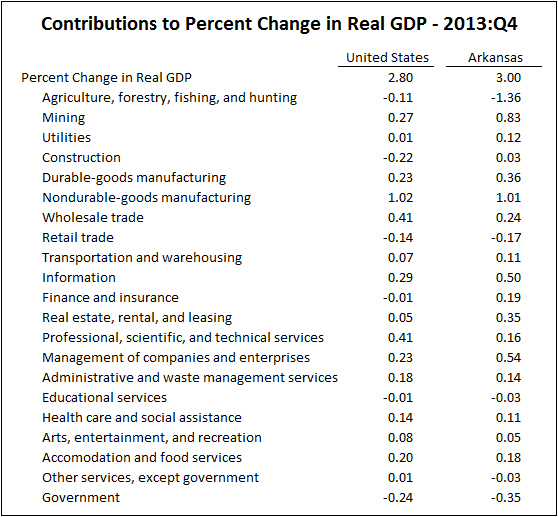 Note:  Data used to generate historical growth rates use an interpolated estimate for the fourth quarter of 2007.  Payments associated with the purchase of Alltel Communications distort the quarterly personal income statistics which are used to calculate quarterly GDP estimates.  The adjusted GDP data is substituted to smooth out what would otherwise look like an excessive growth/contraction pattern at the end of 2007 and beginning of 2008.