Metro Area Unemployment and Employment – May 2015 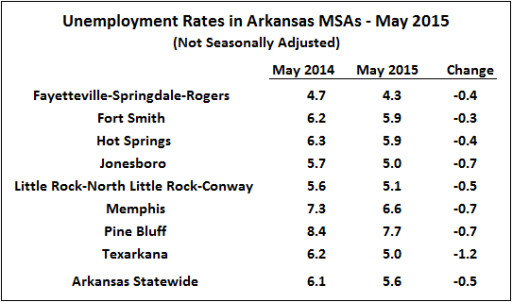 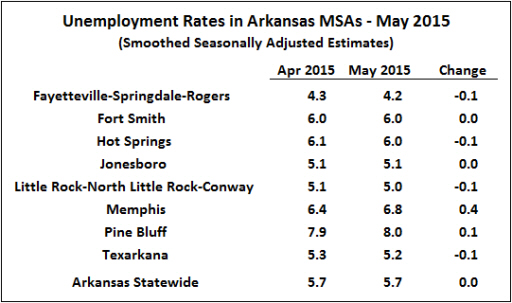 The revisions to seasonally adjusted unemployment rates come from three sources.  First are the changes due to the “new generation of time-series models” that were updated to include updated estimate inputs and population controls.  Second are changes in metro area definitions that affected Fort Smith, Memphis and Texarkana (see Metro Area Unemployment and Employment – January 2015).  Third are the updates to the seasonal factors themselves.  The net results of these updates are illustrated in the set of figures below: 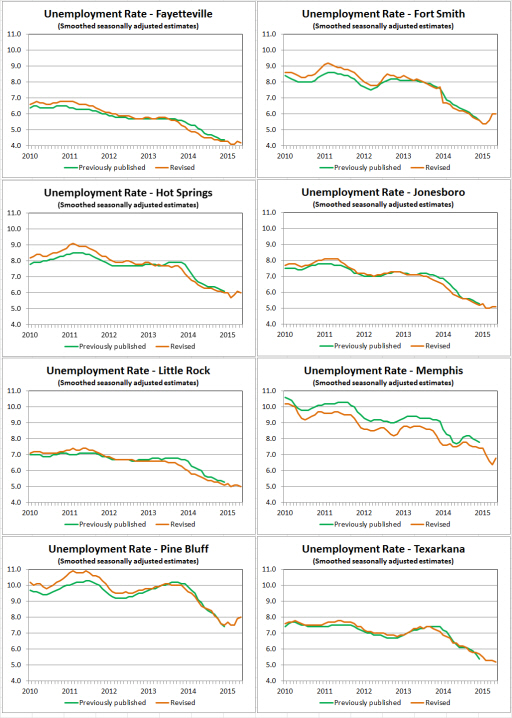 For most of the metro areas in Arkansas, the revisions had the effect of raising the estimates unemployment rates for the period from 2010 through 2012.   The revised statistics also show a smoother downward trend in the unemployment data for late-2013 through 2014.  So far in 2015, the newly-released statistics show leveling-off of unemployment rates in most metro areas, but a move toward higher rates in some areas, particularly Fort Smith and Pine Bluff.

Payroll Employment
Data from the payroll survey show that nonfarm payroll employment changes were mixed in May.   Monthly changes in employment ranged from +1.6% in Hot Springs to -1.2% in Pine Bluff.  Compared to a year ago, Pine Bluff is the only metro area to have experienced a decline in payrolls.  In fact, the Metropolitan Area Employment and Unemployment Summary noted that Pine Bluff had the dubious distinction of having “the largest over-the-year percentage decrease in employment” in the nation (according to the not seasonally adjusted data).   Compared to employment levels before the 2008-09 recession, Little Rock has moved into positive territory, joining Fayetteville and Jonesboro.  The other five metro areas in the state continue to show net declines in employment since December 2007. 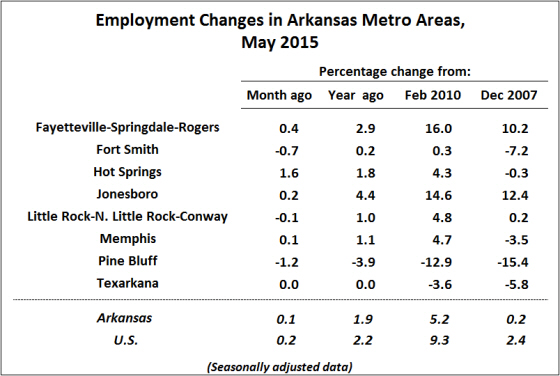