New data on metro area employment and unemployment came out today.  The metro data were subject to the same data revisions that we’ve seen for the state-level data already.   The household employment and unemployment data were estimated using the “new generation of time-series models,”  and updated to incorporate updated estimation inputs and population controls, and the payroll data were revised to reflect the annual benchmarking process.  Just to make it more complicated, today’s report incorporated new geographic delineations for metropolitan statistical areas.   Three metro areas in Arkansas were affected by the new definitions:  Fort Smith, Memphis, and Texarkana  (see endnote*).  Moreover, the revision process is not over:  The not seasonally adjusted data from 2010 forward will be comprehensively revised again on April 21, and smoothed seasonally-adjusted metropolitan area estimates will not be available until after that revision. 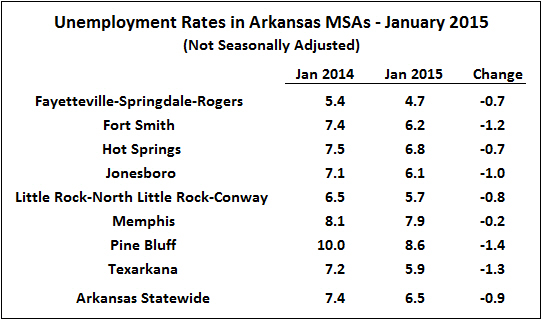 The revisions to metro area unemployment rates were generally not substantial.  As shown in the next table, revisions to the most recent month previously reported (December 2014) were quite minor, even for the metro areas with new geographic delineations.  The revisions had somewhat larger impacts on previous months’ observations, affecting the December 2013-December 2014 year-over-year changes.  Generally speaking, unemployment rates at the end of 2013 were revised downward, reducing the magnitude of unemployment declines measured over the course of 2014.

Payroll Employment
The data for nonfarm payroll employment incorporate new metro area delineations, as well as the annual comprehensive benchmark revisions.  The latest data and growth rates are summarized in the following table: 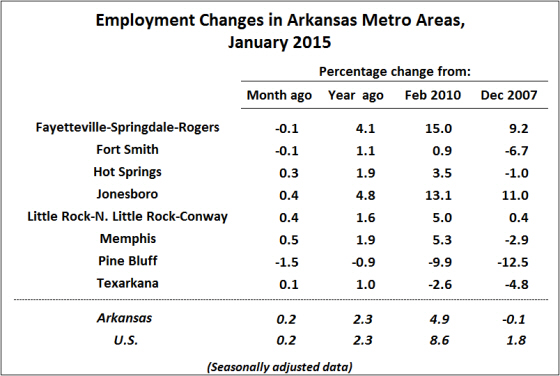 From December 2014 to January 2015, employment dropped by 1.5% in Pine Bluff, and by 0.1% in Fayetteville and Fort Smith.  Other metro areas around the state saw month-over-month gains.  Compared to the previous January, employment in all metro areas except Pine Bluff have seen increases, with the largest gains in Jonesboro and Fayetteville.  Three metro areas are now showing higher levels of payroll employment than before the recession.

To get a sense of how the payroll data revisions affected recent employment growth, the following set of figures compares the revised data to previously published statistics.  In several metro areas, we see the same pattern as in the statewide data revisions; namely, a downward revision to employment growth in late 2013 and a stronger pick-up of growth in 2014.  The data for Northwest Arkansas show a substantial upward revision over the course of 2014 with the cumulative impact measuring nearly 8,000 additional jobs (+3.6%) counted by December 2014.  At the other extreme, the data for Pine Bluff were revised downward, with the cumulative impact amounting to nearly 1,000 fewer jobs (-2.6%) than previously estimated at the end of last year.  Data for Fort Smith, Memphis and Pine Bluff show level shifts associated with the revised metro area delineations.* 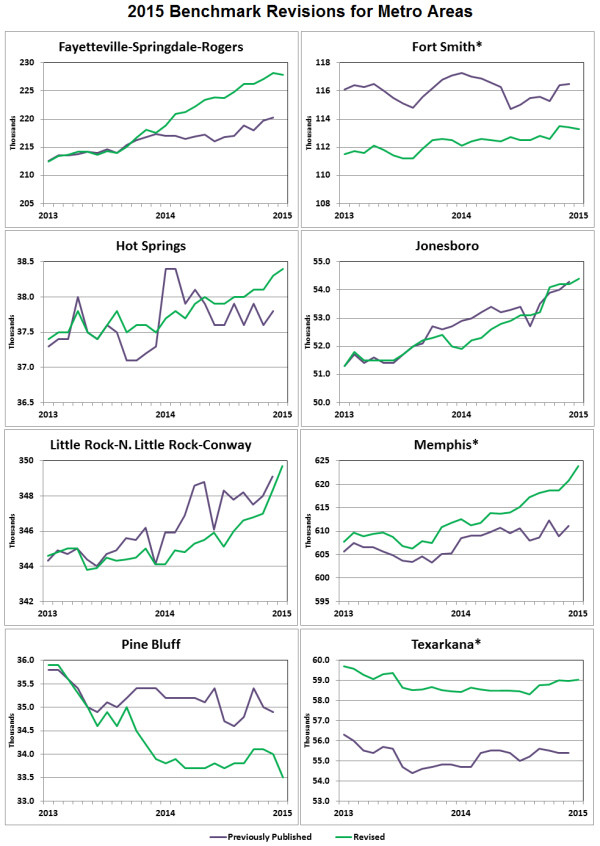