New data on GDP growth in metropolitan areas was released this morning by the Bureau of Economic Analysis.  The data show robust growth in Northwest Arkansas, but rather sluggish growth in other parts of the state.  In June, data on real GDP growth by state showed that Arkansas’ economy grew at a rate of 2.4% in 2013, well above the national average of 1.8%.  The metro data show that growth to be concentrated in the Fayetteville-Springdale-Rodgers Metropolitan Statistical Area (MSA), which grew at a 5.6% rate.  Fort Smith and Hot Springs grew slightly faster than the national average for metropolitan areas, while Jonesboro and Little Rock expanded at growth rates of less than one percent.  Memphis, Pine Bluff and Texarkana each showed negative growth from 2012 to 2013.  Out of the total of 381 MSAs in the United States, only Fayetteville, Fort Smith and Hot Springs ranked above the median growth rate.

Although the metro GDP data are based on the best information presently available, the figure for 2013 will be subject to future revision.  As shown in the table, data for 2011 and 2012 were revised substantially since the last metro GDP report a year ago.  Data for Northwest Arkansas were subject to particularly large revisions.  Previously published data had shown growth rates of 0.1% and 0.5% in 2011 and 2012.  The revised data show growth rates of 4.4% and 1.9%.  At the other end of the scale, growth rates for Texarkana were revised downward rather sharply. 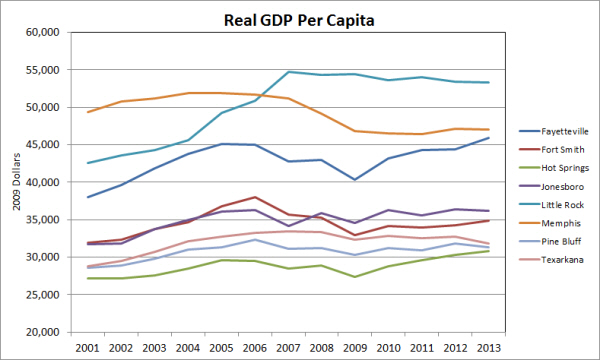