New data on metro area employment and unemployment came out this morning, covering February 2014.  Although unemployment data included revised statistics for February 2013, the fully revised series were still not available (nor were the revised figures for smoothed seasonally adjusted estimates).  The full series of revised data are scheduled to be released April 18.

In the meantime, the new unemployment data show a similar pattern to the figures recently released for January.  Specifically, unemployment rates for February 2013 were revised upward for all of the state’s metro areas, with the revisions ranging from +0.2% to +0.4%.   But compared to these upwardly-revised rates from February 2013, unemployment rates in February 2014 were down in all 8 metro areas.  The largest year-over-year declines were recorded for Fort Smith (-1.4%) and Memphis (-1.1%).  Smaller declines were reported for Pine Bluff and Texarkana. 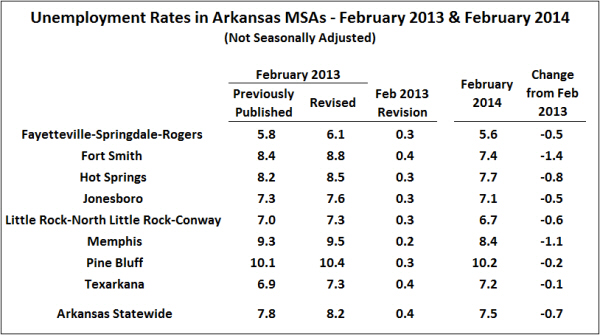 From January to February, nonfarm payroll employment was up in four of the state’s metro areas (Hot Springs, Jonesboro, Memphis, and Texarkana), unchanged  in three (Fayetteville, Little Rock, and Pine Bluff), and declined in Fort Smith.  Compared to February 2013, payroll employment was higher in all areas except Pine Bluff and Texarkana.  The largest year-over-year percentage gains were for Hot Springs (+2.9%) and Jonesboro (+2.7%).  Fayetteville and Jonesboro remain the only metro areas in the state that have higher employment now than pre-recession levels. 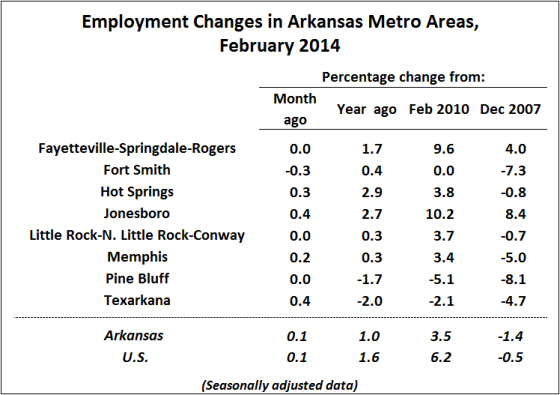