The latest report on metro area employment and unemployment shows negligible changes in the unemployment rates of Arkansas metro areas.  Rates were unchanged from August to September in five of Arkansas’ eight metros, and showed nominal upticks of 0.1% in Hot Springs, Jonesboro, and Little Rock.  Compared to a year earlier, rates are generally unchanged or down slightly (-0.3% in Hot Springs and Jonesboro, for example) with a more substantial decline of 0.9% recorded for Texarkana. 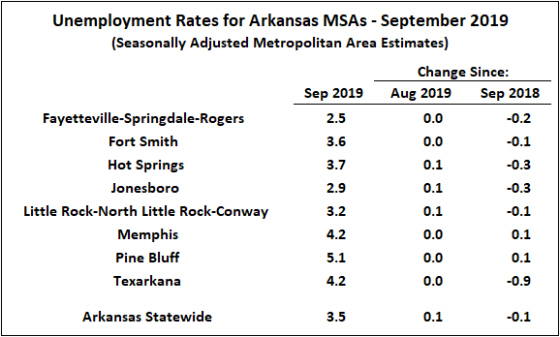 Payroll Employment
Data on nonfarm payroll employment showed mixed changes across Arkansas metro areas.  The Fayetteville-Springdale-Rogers metro area showed the largest monthly increase, up 0.5%.  Fort Smith, Hot Springs, and Pine Bluff were each down by 0.3%.  Over the most recent 12 months, payroll employment has risen in most of the metros, but is down slightly in Fort Smith and Pine Bluff. 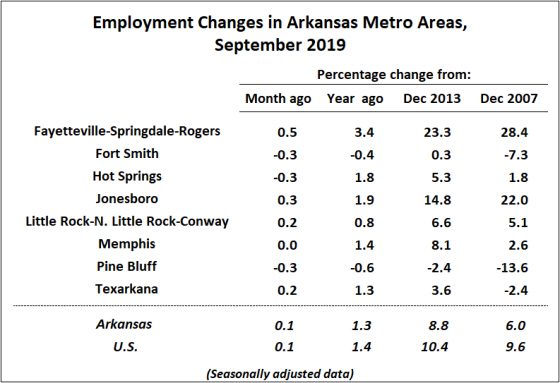 As shown in the last two columns of the table, and in the chart below, the longer run paths of employment in Arkansas’ metro areas continue to diverge.  The current statewide trend of modest, positive growth began around the start of 2014–a trend that is generally reflected in  growth rates around the state.  Fayetteville and Jonesboro continue to see the highest growth rates, while Fort Smith and Pine Bluff are showing little change over that 5-1/2 year period. 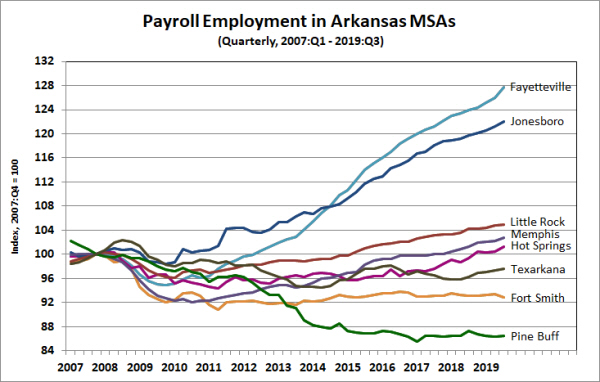