Unemployment rates in Arkansas metro areas were mostly unchanged in October, ticking up 0.1% in Fort Smith and Pine Bluff and down 0.1% in Texarkana. Fayetteville, Jonesboro and Little Rock remain below the statewide average of 3.5%, while Memphis, Pine Bluff and Texarkana remain above 4%.  Compared to October of 2018, unemployment rates have declined somewhat in Fayetteville, Hot Springs, and Jonesboro.  The rate in Texarkana is down a full percentage point from a year earlier. 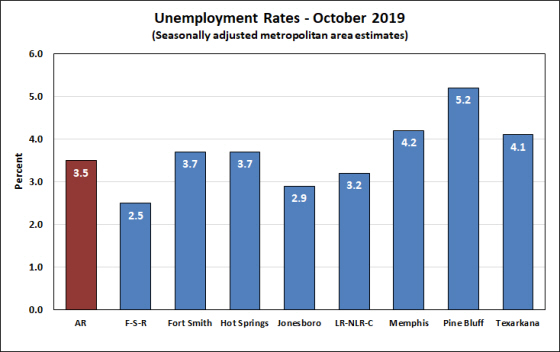 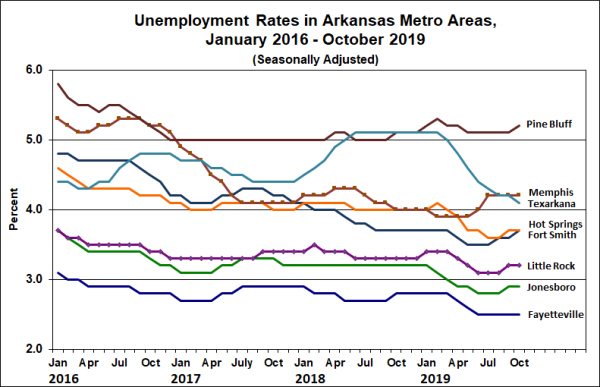 Payroll Employment
Nonfarm payroll employment surged in three metro areas in October:  Fayetteville, Hot Springs, and Jonesboro all saw employment increases of 0.5% for the month.  Fort Smith was unchanged; Little Rock, Memphis, and Texarkana saw slight declines; Pine Bluff was down 0.6%.  Over the past 12 months, employment growth has exceeded the statewide average in Fayetteville, Hot Springs, and Jonesboro.  Employment in Fort Smith has been essentially unchanged not only over the past year, but since the current statewide employment expansion began in late 2013.  Employment in Pine Bluff has been declining consistently and is now 14% lower than it was before the onset of the “Great Recession.” 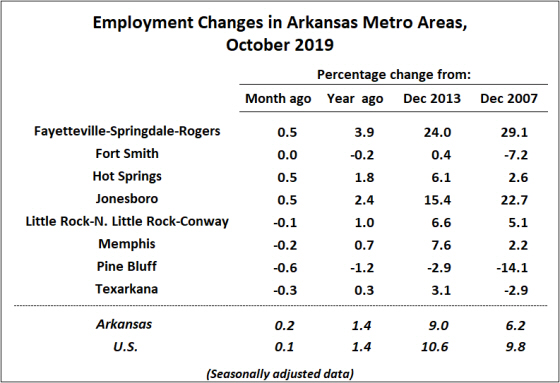