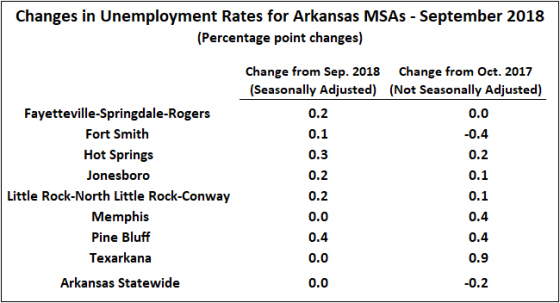 Unemployment rates remain at historic low levels, particularly in the Fayetteville, Jonesboro, and Little Rock.  In other areas of the state, unemployment remains elevated.  In both Pine Bluff and Texarkana, rates have crept back above 5%.    As shown in the figure below, however, recent increases in unemployment rates generally reflect reversals of the declines we saw earlier in the year.  These types of transitory fluctuation are often smoothed away when the data are revised, so we might expect to see metro unemployment rates appear more stable after the January 2019 revisions are completed. 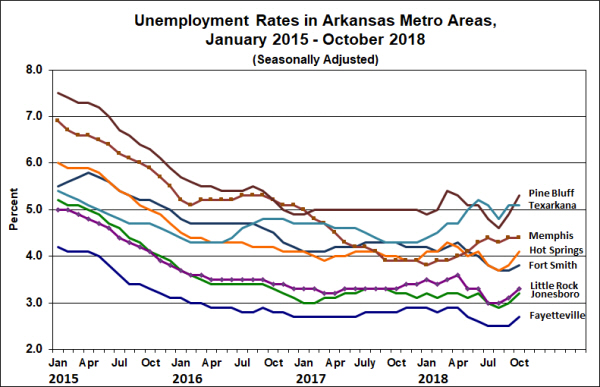 Payroll Employment
Changes in nonfarm payroll employment were mixed across Arkansas metro areas.  Statewide employment declined slightly in October, but the job losses appeared to be concentrated in three metro areas:  Little Rock, Pine Bluff, and Texarkana.  Payrolls continued to grow in both the Northeast and Northwest regions of the state.  Over the past 12 months, employment has increased in all of Arkansas’ metro areas except Pine Bluff, where employment declines continue to accumulate.  Growth in Northwest Arkansas appears to have slowed somewhat, with percentage increases in Jonesboro, Memphis and Little Rock exceeding the growth rate in the Fayetteville-Springdale-Rogers metro area. 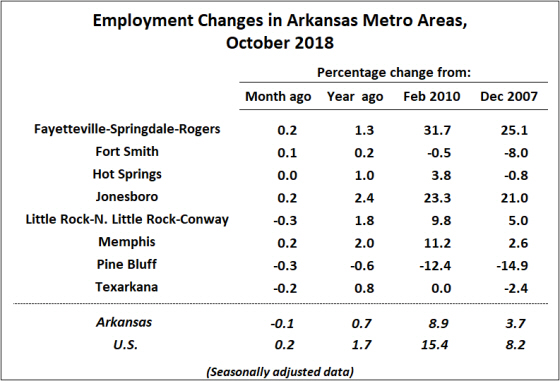